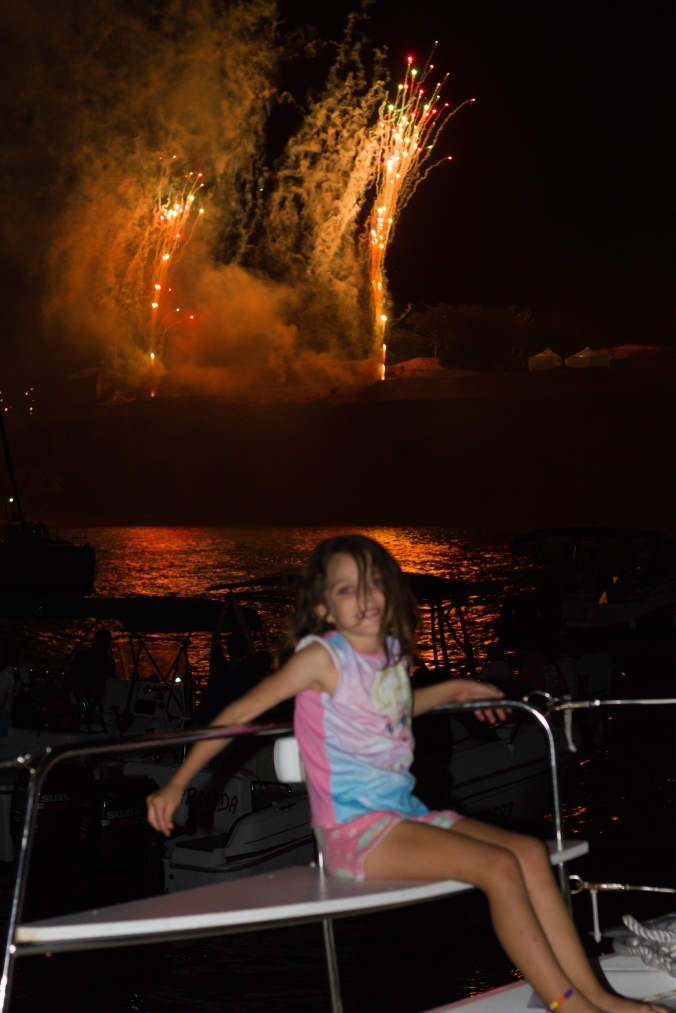 Happy New Year 2017, wow……. sounds futuristic, 2017! Today Keltia and Neverland (boat names) are hiking up the volcano, I unfortunately cannot go as my foot is really painful, I can’t walk far at the moment, I’m pretty sure its plantar fasciitis, I had it a little before this trip but now as I’m walking around on bare feet on the deck all the time and I have really high arches I think my ligament is complaining too much to risk a long hike (that I have been really looking forward t) as I may do more damage and then have a longer to heal. I am defiantly a bit upset, but hope todays day of rest will help.

friends at our boat

Friends over for a drink Cars parked at our house!

In St Anne we met up with around 6 other families and hung out with them, all had kids and it was so great to socialise and have the kids playing with new friends. A Christmas Eve party on the beach was organised by another cruiser with a pot luck, which is where we all bring a dish to share, probably around 60 people there. We had an afternoon on our boat (it was our first time inviting anyone on our boat and we weren’t sure how it would work out, to our delight it was great, the kids spent their time in the water and jumping off the boat, and us adults chatting in the cockpit, we had a total of 21 on board!).

Four families  went for a walk to the most popular beach on the island, it was a mud trail! One of the beaches on the way was a nudist beach, full of naked old men! Alex almost walked on one of them! I was wondering what the kids were thinking. Alex piped up with – “why don’t they have any clothes on?, are they lost?, what if they forget to put their clothes back on and go to the shops?”, very funny. Also had a party on a friends boat called Flip Flops, we left early as kids done but it went till 11 ish, they had even more on their boat than us!

We headed up the island with everyones emails and hoping to catch up with them again. Since we left St Anne in Martinique, we have been sailing/anchoring next to an awesome family from the USA. They have 3 kids and are great fun, Keltia is their boat name. So we planned to meet in Les Anses D’Arlet (stayed 3 nights) which was a stunning little anchorage, we loved it there. Water crystal clear, great snorkelling, the water is starting to get a tad cooler too! Stu speared loads of Lion fish (a pest here in the Carribbean as they eat everything and have no predators, everyone is encouraged to spear them!), we ate them and they are actually really nice, just hard to find ones large enough to eat. Of course Stu was super careful to remove the poisonous spikes before filleting. We went for a snorkel with Keltia and they had a hand held spear (can’t remember the proper name for it, oh a hawain sling) which was kindly offered to me which I accepted after some contemplation- so I made my first ever kill, only as its in the name of conservation! Under Keltias boat were 2 sea snakes in amongst the sea grass, there are quite a lot of eels too. 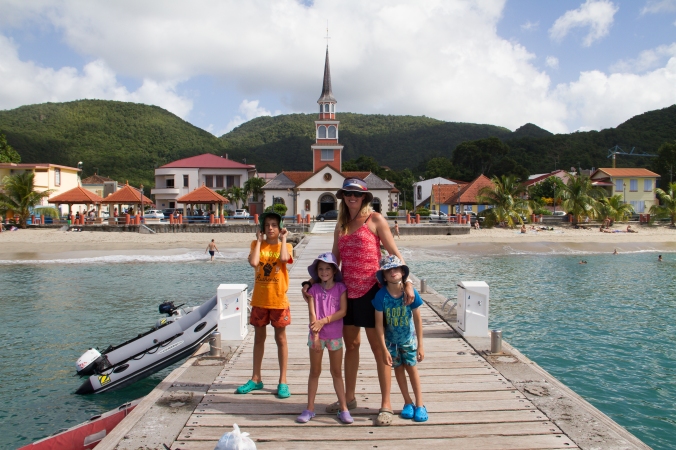 Les Anses D’Arlet, look a church at the end of the dock! 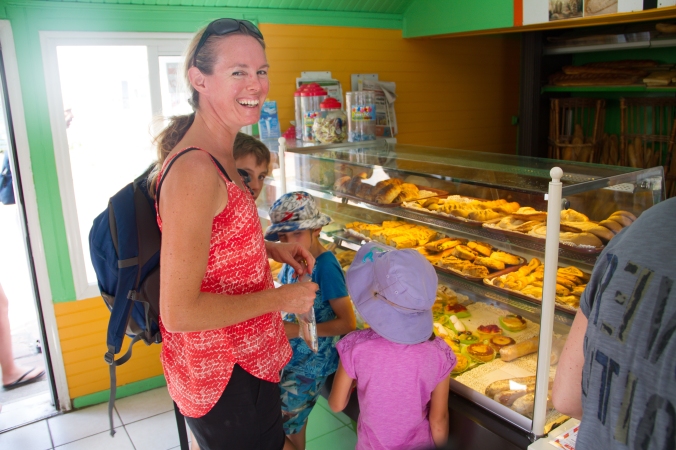 Heaven – we love Pain de chocolate and baguettes. I’ll start the diet next year and defiantly not here!! 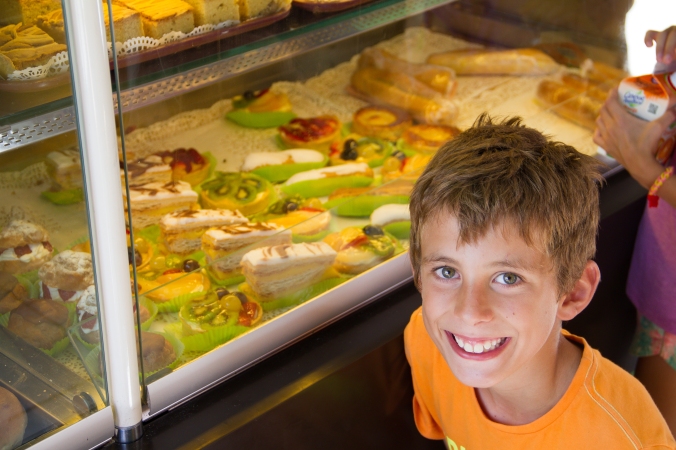 Anne Dufour was our next anchorage, really windy anchorage (bullets coming over the mountains) and loads of people and dive boats as it has supurb snorkling according to the guide. It was only a few hours north, so we arrived around 11 am, had lunch and made plans to snorkel with Keltia. We ended up anchoring and being fourth time lucky! As the anchor kept dragging on coral and rock, I am getting good at finding small sand holes and dropping the anchor on them, we finally got a good sand holding – yay.  Snorkling was great, Stu got down to 15 m (I couldn’t see him in the dark mercy depths) and 1 minute 20 underwater – man he’s a fish!

We checked out Anse Noir the next bay over with black volcanic sand, so different, it looks like dirt but up close its really pretty with glistening sparkles reflecting off the sand. Though I didn’t appreciate it being thrown at me, guess it serves myself right at I pumped the kids up with handfuls of the black sand to go up to Nate and Stu  as if they were going to throw it at them (while I was filming), of course Jake did!!!! The girls walked over to the next bay while the boys dinged back around to meet up with us and we hung out. As we were leaving 2 french men came up to Stu and I wanting us to move Neverland! Neither of us could understand each other so we just said no and off we went, it was almost nightfall and not safe to move, plus the next bay was full of boats. Keltia came back (they have our back its so good) but by that time we were off, it was so nice to have friends looking out for us. About an hour later these 2 fisherman (in a dingy so assume thats what they were), came back and asked us again with gestures to move our boat, we said no and that the bay was an overnight anchorage according  to the guide book. It was sundown by this stage and dinner cooking, one of the fisherman got aggressive and started banging on the boat, then made some gesture at his neck like a threat!!! Well you don’t bang Stus boat, so Stu high tailed it down the steps and told him to leave. We asked them to go to Keltia (as Kelly speaks French), then we would know what they were saying. So I quickly jumped on the VHF and gave them a heads up!!!!! It turns out they use massive nets at night to go fishing in the bay and it was their lively hood, so reluctantly we decided we were all going to head for Forte de France pretty much straight away, this will be our first night time motoring (was around 5 nm so too close to sail) and anchoring. Anyway it was great to do a little night time boating, me on the front looking out for buoys with the torch (loads of them in close to bays), man have to be flexible and ready for the unexpected living this life! We were rewarded the next morning as we were anchored right under Forte Louis! We going to move here the next day anyway –  So so cool.

Forte Louis, we were anchored right here, and Forte de France in background.

We had a day of surprises for our New years Eve celebrations.  Firstly we were doing the usual on New Years Eve eve (so on my best mates birthday, Tania on Dec 30th),we were trying to find boat parts for our leaking hatches – no luck. We were leaving (with me hobbling a lot on my sore feet), and saw some kids across the bank rounding up Iguanas!!!! Yes you heard right, giant massive prehistoric lizards!!!! We quickly dinged over, by this stage the kids had gone and we found one under a little bridge, which a person was sitting beneath (perhaps was his home, not sure), he started talking (in French) to us gesturing towards the tree behind us. Then we discovered this tree amongst much excitement was covered in Iguanas!!!!! There were probably 20 of them in this one tree, with one obviously being the king boss testosterone driven male, he was the only one coloured orange was much larger than the others and would charge them and the other Iguanas would fall off into the water and swim to the edge. The others ranged in colour from a light grey, to dark grey, to bright green. So interesting and surprising!! Such a highlight to the day………. but unknown to us there were more surprises to come.

Wow these Iguanas are super cool

We dinged to the dingy dock to see if we could catch the Fort, unfortunately it was closed but the town was buzzing, people seemed to be coming out of the woodwork. We checked out an old church. I ventured in not sure what to expect and it turned out to be a library. Looking up to the ceiling which was painted in gold mosaics and the upper level was visible containing hundreds of  very old dusty books. My imagination was going wild with books flying from one spot to another, warlocks, witches and magical books carrying long lost secrets revealed for the  first time but in the wrong hands, books opening and whole scenes appearing in front of us.  It looked like a scene from Harry Potter.

We were just about to order dinner when we bumped into the Keltia crew, so they invited us to pizza which we accepted and sheepishly snuck off discreetly from our table. So pizza was interesting, to sit down we had to purchase a bottle of champagne, it turned out to be Moet! Well I must say my taste buds must be changing as I liked it! – another surprise for the day. By this stage the streets were packed and stalls had popped up along the streets, the musicians were still practicing on the stage by the park.  We asked a waiter and he said they are all celebrating New Years Eve on New years Eve Eve and they spend the actual New Years Eve with their families!!! The French……have to do it a little different! So we had rocked up into town and this was our New Years Eve a day early! Cool, another surprise. Then we found out that they were doing fireworks over the water, yay now we were excited we asked Keltia to come watch the fireworks with us on our boat, it was great. They certainly did a great show.

Thanks for reading guys and we hope you had a great introduction to the New Year. Send me a message as I’m keen to know the goss from home.