Arrrrrrrrrrrg we visitid de Calypso shack, the Pirates of the Caribbean witch scene was filmed here!!!!!!

Well I think I’m starting to talk like dem Caribbean people man, with shops called tings like “Dis and Dat” (for this and that) and “Lots a tings”(lots of things), I must say I have noticed my spelling is declining! Hmmmmmm ………..oh well the price we pay for cruising the Caribbean!!!! he he.  Also did I mention the French islands with their Baguettes and Chocolate croissants!!!! Oh my, waist line is not as it was!

Dominica Dominica, we were apprehensive to visit it. We had heard other kid boats talking about it and some were skipping the island altogether, another kid boat arrived and left the following day as when they were checking into customs two men were verbally fighting and they got the ding bats and decided to not check in which means they needed to leave.  The problem is the safety of the island, not a good reputation and the write ups are ok but not glowing by any means in regards to theft and to a lesser extent personal safety.

So it was with internal trepidation that I pursued the idea of touring the island, we had arranged a taxi to take us. We invited another kid boat who pulled out last minute as I explained earlier (which we all felt bummed out about but totally understood), then we pulled up to the dock and were told we weren’t allowed to lock up to the dock as the fishermen sometimes need to move the dingys . This was not cool for us as yesterday there was no one telling us to do this and we did lock our dingy up to the dock, the official assured us it would be safe but all it would take is for her to change shift at 4pm, or go and get lunch etc and bye bye dingy. So we decided to not do the tour so I went off to tell the taxi driver who would be waiting for us…….but he was no where to be found! Hmmmmm we were wondering if the boat boys figured out we weren’t doing a tour with them and told him to rack off. Any way it was not meant to be that day.

So as you can imagine it took a fair bit of convincing Stu to hire a car to check out the island, but man we are sure glad we did. The thing is we were told by several locals and a tourist the following things – do not drive at night, there are lots of pot holes so drive very carefully, do not go to the North West part as dangerous, watch out for land slides when its raining, they are crazy drivers and drive in the middle of the road, toot the horn when turning corners and do not stop for anyone trying to flag you down! Hmmmmmmmm, that on top of the seedy reputation of the island.   Was I feeling like I was taking and infact persuading my family to enter a dangerous place full of goodness knows what and who?????………….definitely  yes. That night before we got the car my imagination was defiantly working over time for the  worse. 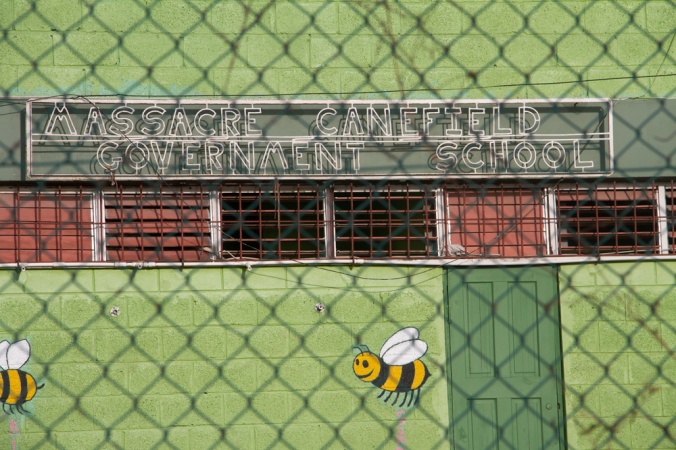 We may send the kids here if home schooling doesn’t improve !

Then we got on the roads the next day and we discovered the roads were well maintained, the road sides were clean and many areas even had small trees / shrubs planted along it, the drivers were not fast or totally crazy (Grenada was way way worse and Stu hired a car and drove many times there, even witnessing a mini bus go over a cliff) and the walking tracks were so out of the way it felt safe. The locals in the mountains were really friendly and helpful and not surly like some seem be be on some islands. We were stoked with the driving, the countryside and the experience.

Highest road, notice were up in the clouds and its actually cold.

We had the car two days and saw full on tropical rainforest at its best. I wish my foot was not sore as I would have loved to do some longer trecks to amazing places like desolation valleys boiling lake and do the canyoning there.  If your a hiker and want an amazing place to visit, this is it. We saw many waterfalls, swam in Titou gorge which was freezing but so worth it to see the water carving out the rock and magnificent trafalgar falls a double waterfall falling off the top of a mountain cliff. We drove up into the clouds and walked along a trail to a crater pool (that I didn’t make it to, as my foot was complaining) but the walk was an experience it rained the whole time and the path was more like a stream, I don’t mean that in a bad way it was great.  Mum, you would have loved seeing the magnificent giant tree ferns that were the size of actual trees, like 8 metres high!   The stream path winded up and down with streams to cross and it was just so beautiful. Sienna and I slipped on the same rock, I was very lucky as I fell hard. Stu was amazed I didn’t do a real injury  to myself (so was I). Alex delighted in this palm flower frond Stu plucked for him, he carried it the whole way designing in his head a boat that he was going to make after he had used it to collect water for everyone to drink. These kids are great, they walked a long way and were real troopers. At the end Stu washed everyones muddy shoes in the roadside storm drain that was more like a beautiful stream, he stripped off and had a once in a month wash! Brrrrrrrr. Much to the delight of the kids who thought it was so funny, laughing, taking photos (which he wants me to delete, oopppppps not got around to that yet, he he), and making butt….. etc jokes!!!! No there are certainly no pics of this in the blog!!!!!

We’re on top of the mountain with clouds around us.

Alex very happy to be collecting stream water for everyone to drink, with his palm flower frond Stu picked for him.

We also saw hot springs steaming out of the tropical rainforest as we drove past, houses built on unbelievable cliff edges (no way would that be allowed in OZ), and drove along cliffs edges that were scary to look down. Bev you would have loved the adventure of exploring this place, hurry up and get here!!!! 😉 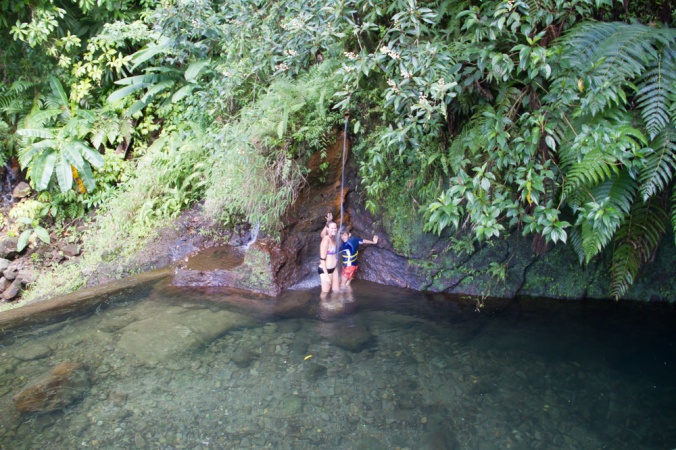 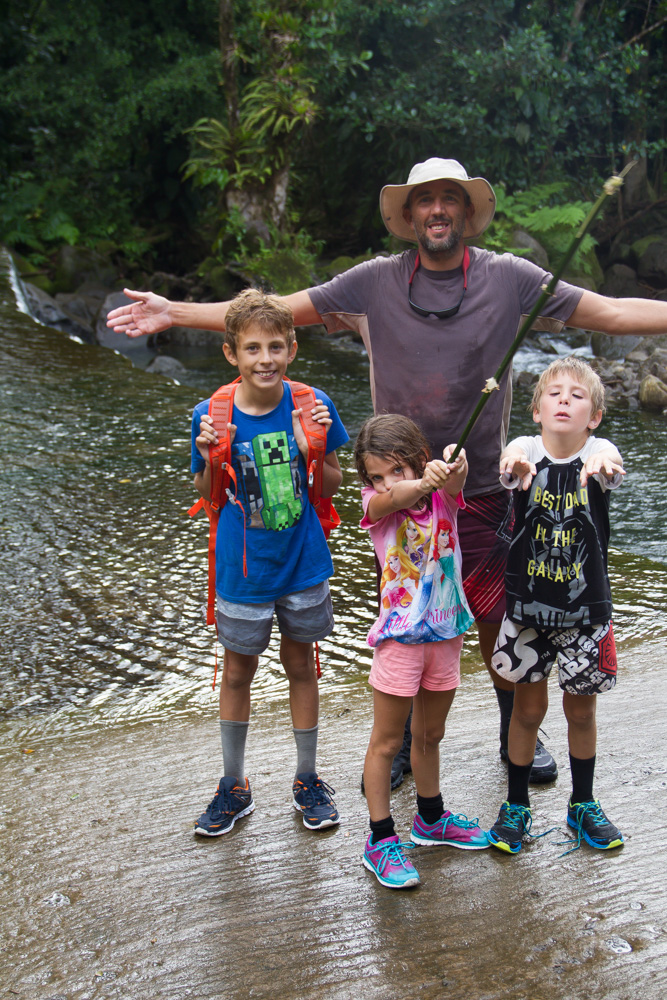 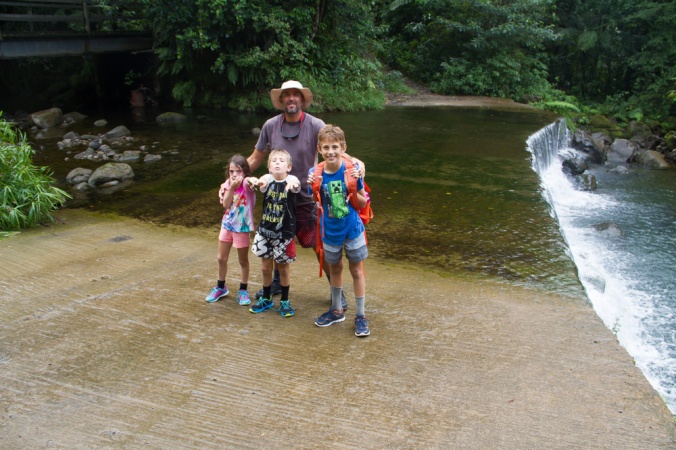 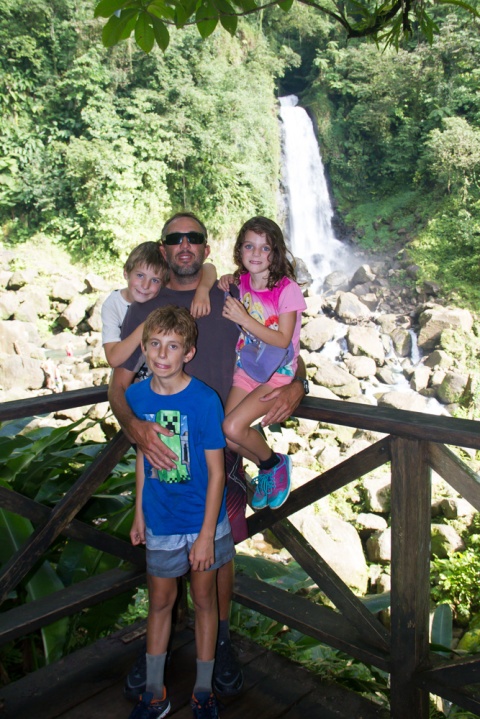 We also went for a paddle up Indian river, we were very happy to avoid “ANGRY MAN” taking us. Well that what we called him anyways. He earned this name as he had approached us way way out to sea on our arrival (in a home made wooden bright red boat, like all the local boat boys and fisherman have), he asked us (just as we were tacking, bad timing) if we wanted a tour up the river (we were still an hour away as it was upwind, and the last thing we wanted to do was organise something like this right now), Stu did a fob off as couldn’t be bothered and said we weren’t going to Dominica and were heading to Guadeloupe instead. So he left us alone. We have experienced this kind of thing before in St Lucia. So day 1 of being in Dominica we decided we were going to do this boat tour ourselves, or try any way. We have oars (no motors allowed to go up Indian river), we can paddle up ourselves. So we enter the river mouth to be yelled at by the same dread head dude that met us out to sea, yelling at us to stop. He ran to his boat and came out to yell at us some more about how we couldn’t go up the river and we needed a boat tour, we said we can paddle with our oars. Which infuriated him some more and he yelled at us we needed to go via a tour guide……………O…..K. Righty O, so off we went tail between our legs, but a little indignant that he was so aggressive when it didn’t need to be that way. So that was episode 2 from ANGRY MAN. Episode 3 was when we arrived the following day for our guided boat tour up the river, he confronted Stu and demanded why Stu had told him he was going to Guadeloupe when he was here!!!!!! Ok Stu was got caught out on a lie, but who cares, he was confrontational and aggressive towards Stu and I didn’t like it. I simply said “we changed our minds” as Stu was stating it was getting late we didn’t want to arrive in Guadeloupe after dark. So Episode 4 from ANGRY MAN was him yelling at some other local and getting very wound up about something or other…………..So we were just going to stay out of angry mans grill, which we did and were very thankful he was not the one to take us on our tour. We got a great guy who was funny and chilled.

Indian River was also a highlight, I reckon Ange and Carlz would have loved it big time. Such an amazing place and perfect for the movie- Pirates of the Caribbean. The producers didn’t have to change anything, they just built the witches shack you see in one of the pics below.  There was also a surprise bush bar nestled in the dense blood wood tree forest, we were advised to try the dynamite punch. WHOA ………only one was required, so glad we didn’t stay longer!!! It was strong for one little drink. Poor Sienna fell off her funky blood wood tree trunk chair, as it wasn’t put together properly, poor little tot. Lots of daddy cuddles afterwards much to Stus delight. Indian river was a place where you could imagine elves and fairies flitting amongst the old exposed tree roots, the pics don’t do it justice. 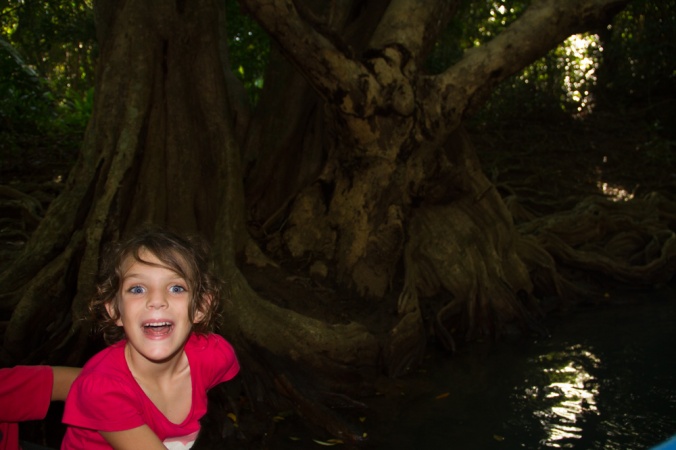 Dominica Dominica, we loved this island. A bit Like New Zealand but much warmer and of course tropical. We saved a man blowing out to sea on his stand up paddle board as he didn’t want to stop eating his mango!!!!!!! How funny, he just flagged us down whilst still stuffing mango into his mouth as we were heading back to Neverland (lucky for him someone was around), then jumped aboard the dingy, squashed our food, flogged us some mangoes, we saved his SUP board again as he didn’t tie it to the dock and thats that, he he.

The 3 little darlings, having wrestle time just before bed in Cockpit.