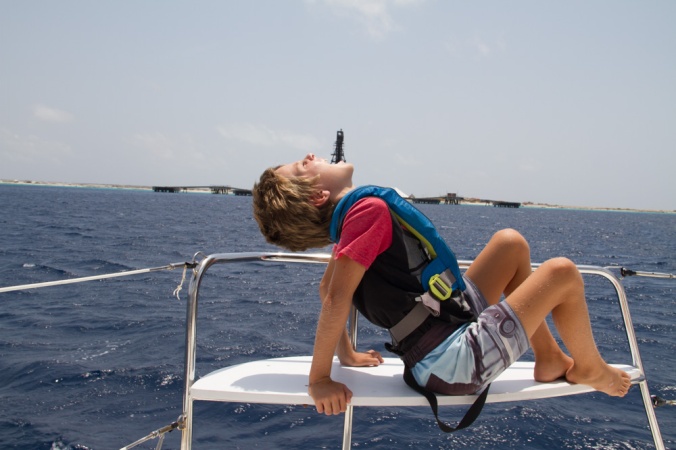 We had some great times with great people in St Martin. We met up again with boats we spent christmas with – Flip Flops (with their crazy captain and crew!), Trismic and Higgins. We picked up our new main sail with a few hastles (as it was too large, any ways thats another story), and did loads of boat jobs between school and friends. 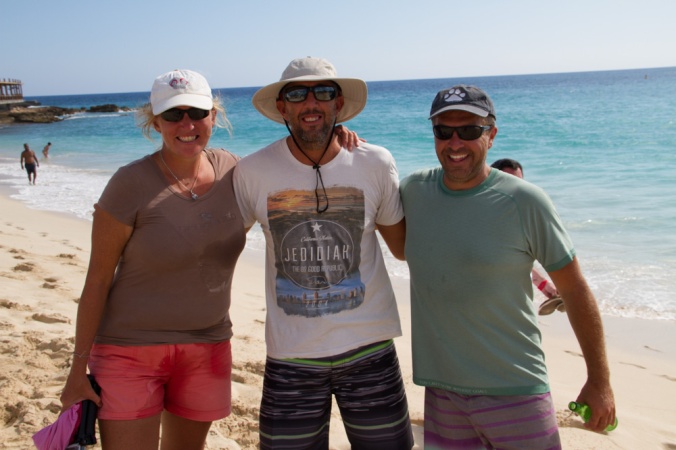 Nikki and Haig the Flip Floppians, so great to see them again. 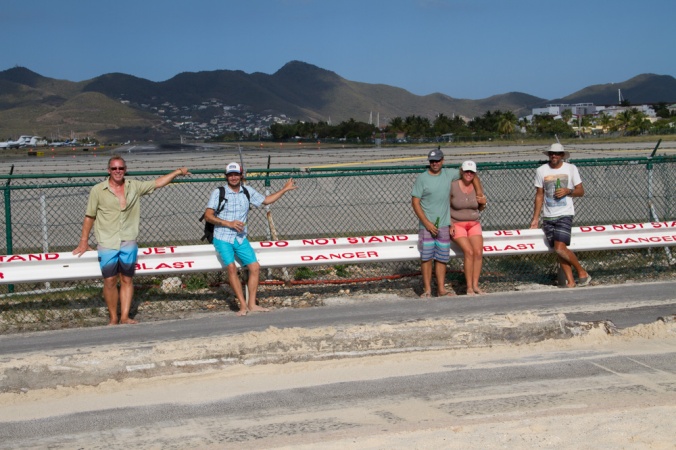 Friends in St Martin being blown by the jet engines. 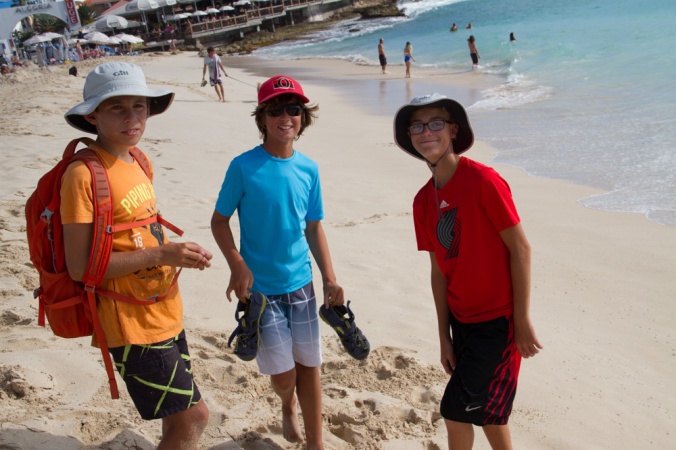 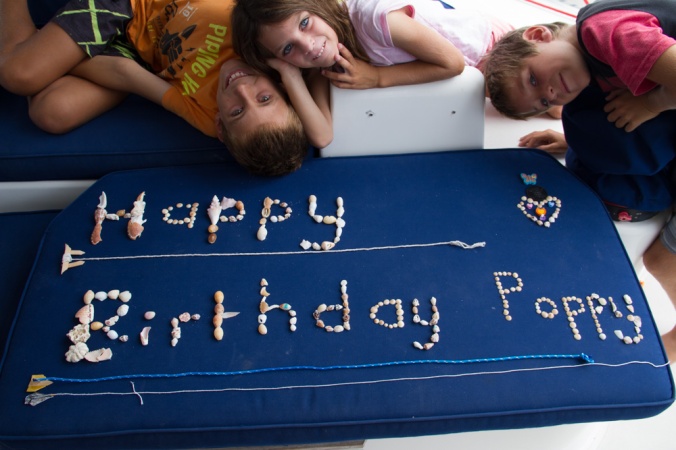 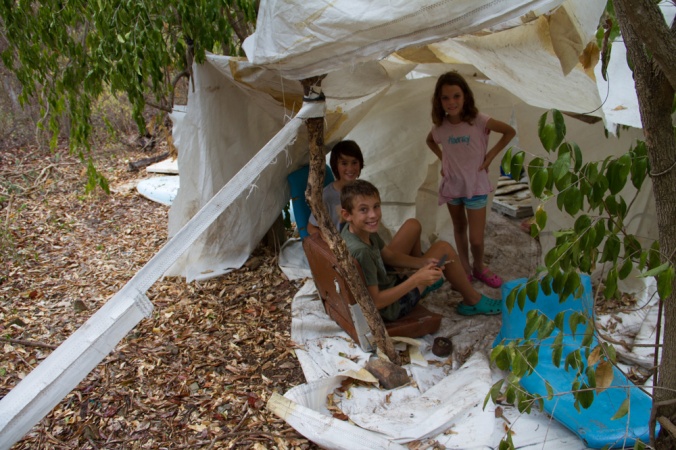 Explorer island tents made by many a child visiting the island. 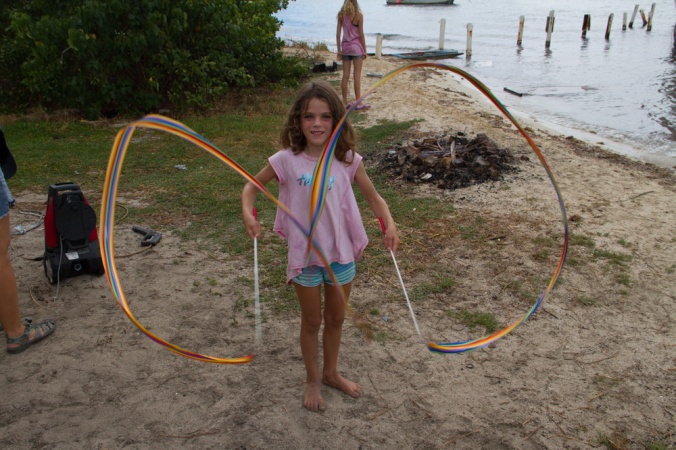 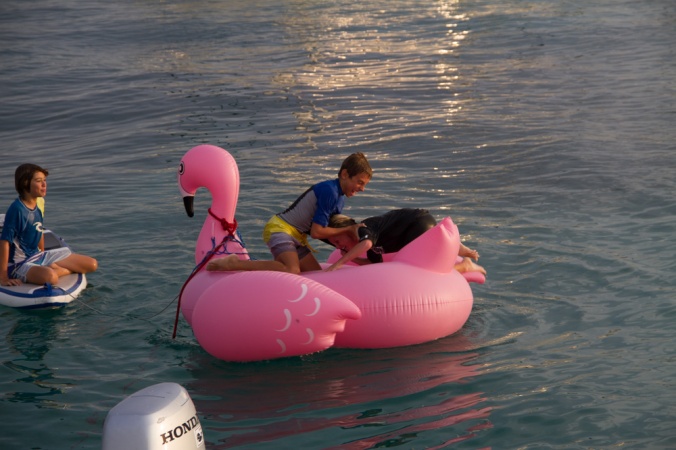 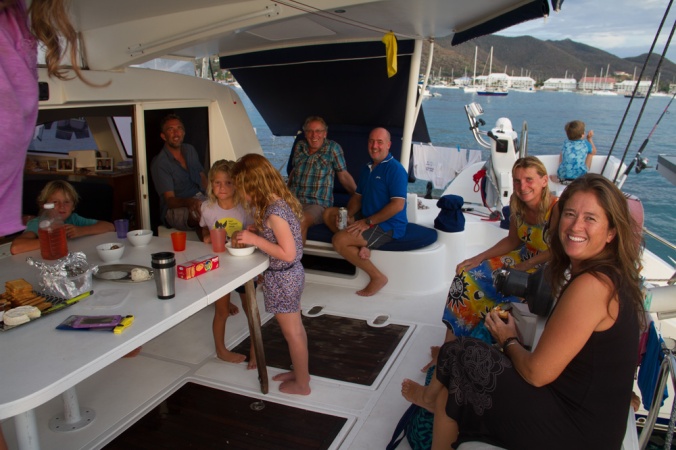 Dinner on Neverland with awesome friends from Trismic and Higgins. 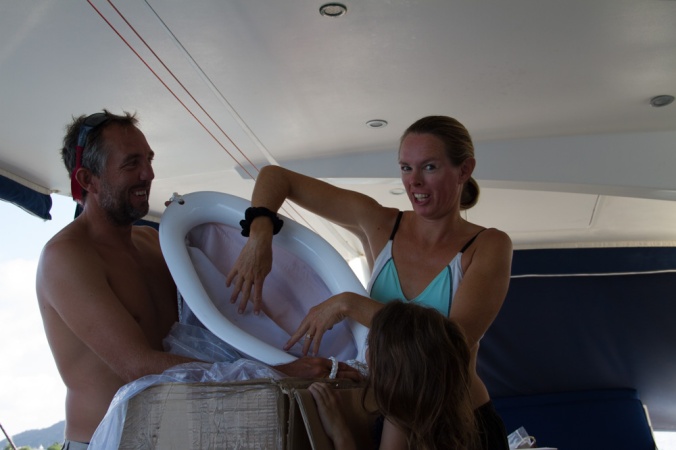 Our new spinnaker straight out of the box, sleeve snuffer looks like a toilet seat! 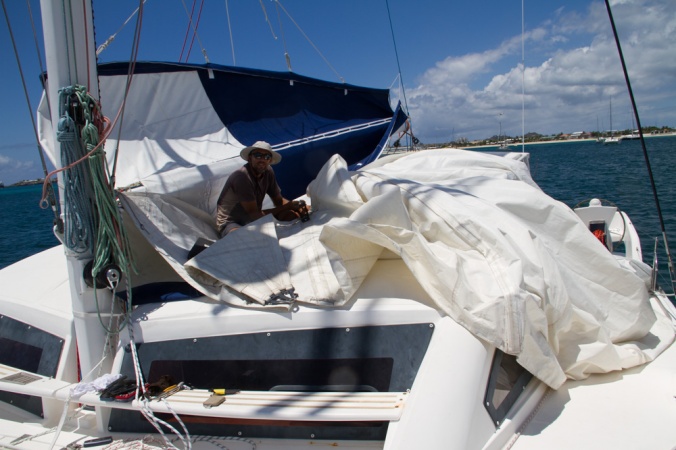 It was very hard saying goodbye to our great friends on Trismic, we won’t be seeing them again on this trip but hope to meet up with them again some year. They are the sort of people we would be friends with at home, great quality, real, genuine, no pretentiousness  and fun people people. We will and are missing you guys. Kids very sad to leave, it was difficult to extract the kids away from their boat when it was time to leave, they were very kind and minded them for a few hours while we sorted the boat. 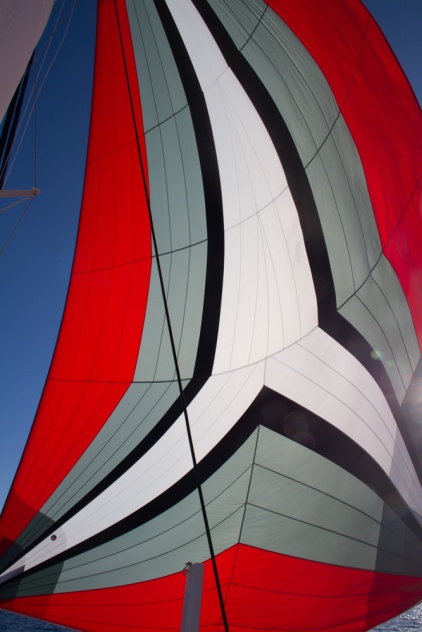 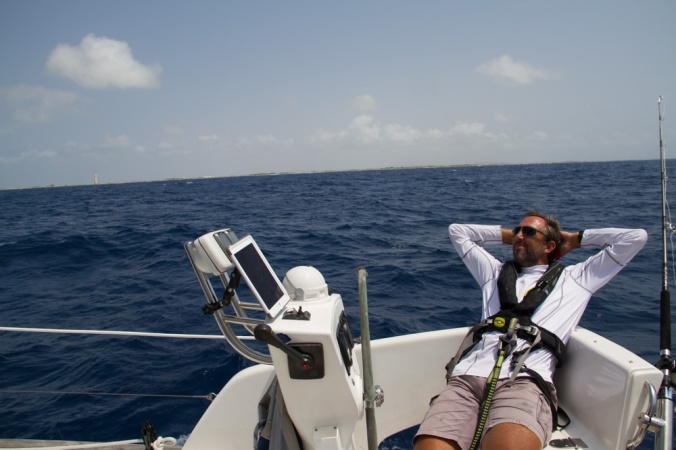 This is our longest passage so far, I am currently writing this while on passage!!! Here we are with 2 – 2.5 m swells hitting our beam so it’s really rocky and uncomfortable. Alex’s bowl smashed on the floor just because it was on the bench (which has a lip) and everything went flying.  I was making bread at the time and was holding the mixture in the bread maker bowl when the bowl exploded behind me at my feet. Oh well another breakage donated to King Neptune!

It has been a down wind passage, and I really was surprised how nice it is to sail downwind, I was expecting to feel sick for the most of the time and exhausted with 24 hour watch keeping. Most of our passages have been upwind though not all and I guess I have memories of head in bucket, which puts me off. It was a nice surprise to really enjoy the night watches and not feel sea sick once, even now with the seas rocking the boat side to side and here I am sitting inside at the Nav station writing on the computer!!!! Unheard of. Yippee for Sturgeon is all I can say, and I purchased 13 more boxes in St Martin.

During the first 2 night watches it was really calm and really nice, I read lots of the book ‘South Pacific Passages’ so happy as I don’t tend to find I can read this when the kids are up. It is so peaceful and nice to have to some time alone. Stu watched the whole of episode one of Game of Thrones whilst on watch at night (still doing his 10 minutely watches of course), thanks to Drakkar (a New Zealand family of 4 boat), who gave us around 200 movies, whom they got off a boat called Fantasy. I appreciated Neil (on Trismic) reassuring me that the weather window was perfect to leave for Bonaire, there had been large swells in the Marigot anchorage in St Martin and I was a little apprehensive.

Stu was so stoked to catch a 4 foot Wahoo on his new fishing winch. Stu ate a small amount to start with on the off chance it had ciguatera poisoning, all good so we had it for dinner for the next 4 nights! 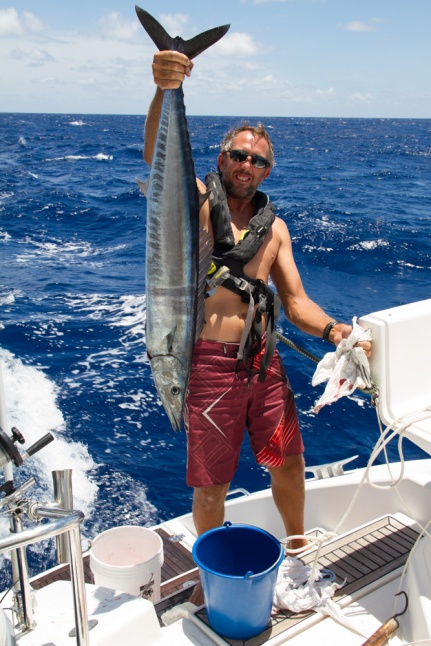 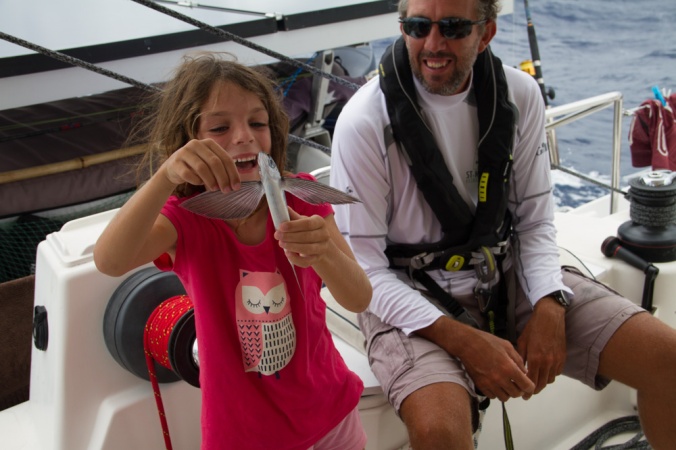 The fun to be had with a dead flying fish!

Stu has set the boat up to perfection, Neverland is really great in so many ways. We set up a preventer (rope attached to 2 blocks which are like big pulleys attached to the end of the boom and the other end to the deck) to prevent us doing an accidental gybe which can cause damage when it slams over to the the other tack (wind coming from other side of boat). We used it most of the way, day and night.

We used the jack lines again with a tether line attached to our lifejackets that have harnesses, they are positioned perfectly and I am always using them to hang on. I had a shower each night, it was so great to be able to have a shower and the first was hot as Stu has recently set up the generator to heat the water up – YAY. What a man.

Stu – the passage went really well, the only incident was a sheave on the outhaul which was wearing and very noisy so I had to rig up a dyneema rope to pull the sail down and take pressure off the outhaul rope. Other than that its been an easy passage. I wish we didn’t catch such a big fish the first day of sailing as we haven’t fished as we have too much!!!!! As usual the last 20 nm takes forever!!!!!!!!

On the last night we could of had a collision with a fishing vessel that was not transmitting AIS and had no navigation lights, so we couldn’t see which way he was heading, it just had white light. Stu says it amazes me how we can be so far out at sea and not see a boat for days and days, then you can be on a collision course with the only other vessel out at sea. We actually were on a collision course as the light was not moving which means we were on a collision with the vessel. We think Radar rocks, we used it to figure out the direction it was heading and changed course to avoid it. We also dodged 2 rain squalls using the radar, it was night and obviously we couldn’t  see the rain (very dark nights also, only a 1/4 moon for end part of night), we didn’t want to reef so dodging the squalls was great as they usually have extra wind, we can’t tell how much either. 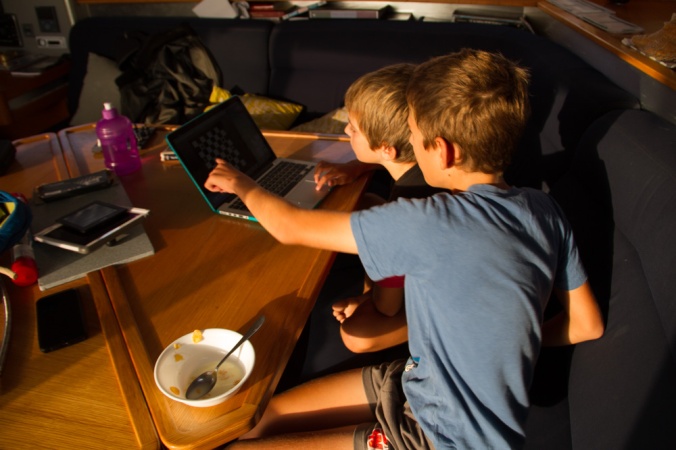 Stu is currently very excited seeing a lighthouse, our first land sighting. Here we are in Bonaire. This island is really long and low, we can see wind turbines.

The kids were really very good, moments of chaos of course but on the whole very good. Jake was hard work for the first day then I realised he was actually a bit afraid and we had had a chat, he felt and was better after that. 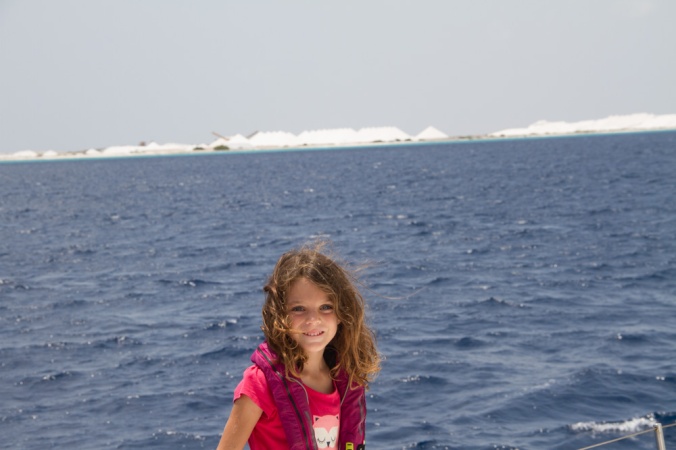 Sienna with salt piles in background.

Jake – we caught the biggest fish ever and it fed us for 3 days. This passage has been fun, romantic, boring, rocky and fishy. I threw an alive flying fish back overboard as it was flapping around on the cockpit floor. Mum the sails they are gone, now were in a 50 knot gust, oh nooooo. The mast is gone, we can’t push the boat there’s no wind were drifting into rocks, everyone stick your butts out the back, FLUFF FLUFF and crackers. We’re making it, fluff up a tornado!!!

Alex – it took for 4 days to get there and a half. We got a new fishing rod and leuer’s. I miss home and Jakey misses his girlfriend Jeff!!!!! Sienna – this is just a joke!!! Alex – this passage has been pretty boring and a little bit fun. It was fun because we didn’t do homework and I beated daddy at chess for the first time!!!!!!!!!!!!!

Thanks for reading our nonsense!!!!