Just after we arrived and rafted up.

Henry from S/V Alkemi, climbing our shroud with a home made rope device.

We sailed with 2 other kid boats to the Chagres river. As we neared the river mouth Bobby on S/V Alkemi radioed us to tell us there was a floating branch at the entrance, much appreciated as it was actually a tree! As we entered the river it was like a mystical forest scene, with jungle right up to the river’s edge with thick dense tropical foliage including stunning flowers. We sat on the trampolines in wonder knowing the diverse range of animals in the forest from monkeys, crocs, sloths, toucans, parrots, Harpy Eagles and more hoping to catch a glimpse of one.

Noisy howler monkey, sounds like a pack of barking dogs. 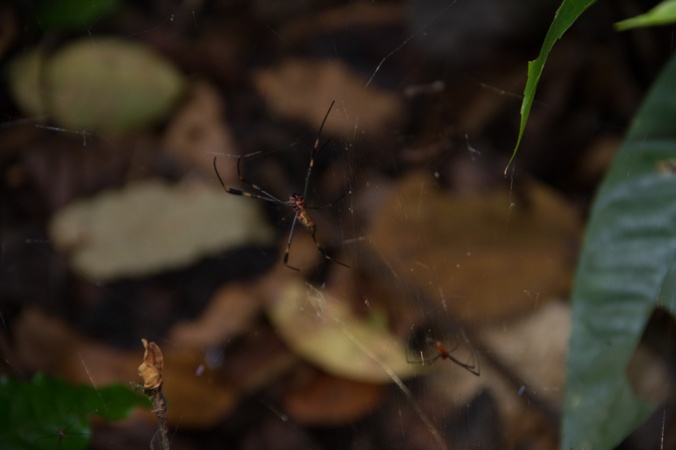 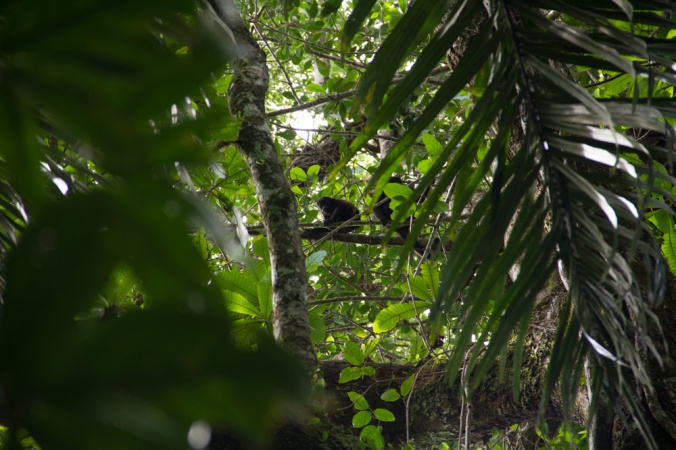 As we rounded the corner Alkemi called us asking if we all wanted to raft up together, “oh yeh, that would be awesome!”, how exciting, I’ve never rafted up to other boats before. So S/V Zelma rafted up first then we did and voila – a massive party boat! Needless to say the 11 kids all went nuts swinging and climbing on Neverland, jumping from boat to boat and we had a late night chatting and having fun (including the kids, a very late night for them).  At one stage there were 5 kids swinging on the halyard at the one time! Sienna was in form climbing up the shroud with the adults gasping and taking pics. 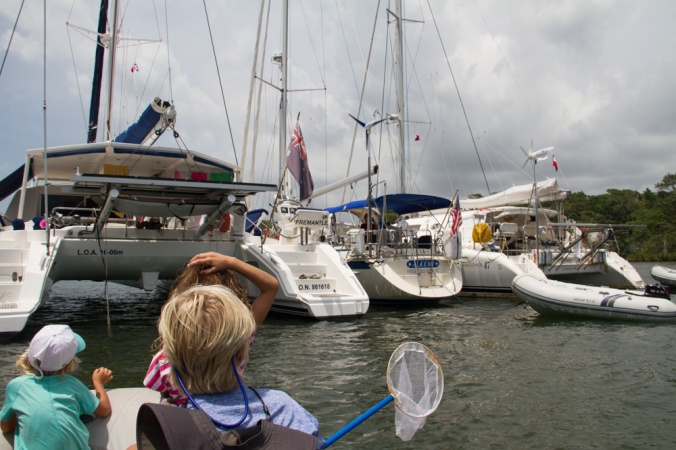 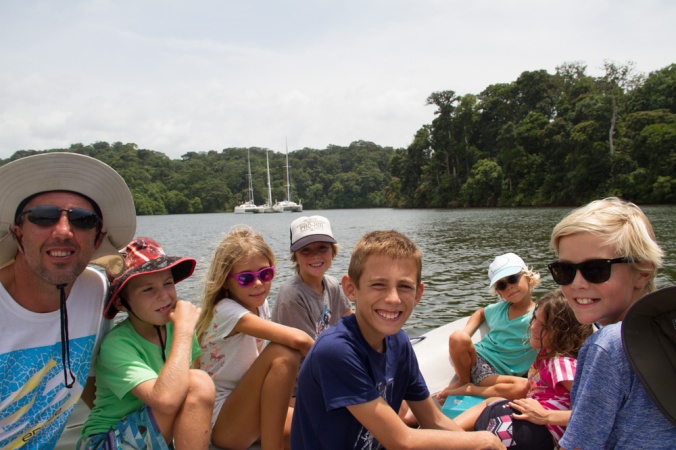 We have been keeping an eye on the wind just in case we get some strong winds as there is a lot of weight on one anchor- Alkemi’s. We have been told by a local to not swim as there are crocs and to not leave your dingy unattended on the river’s edge, as the locals will take the motor. So off we went the following day for an exploration, great fun was to be had trying to catch giant butterflies with our net, we had a few extra kids in our tender so it was very exciting lunging for butterflies. Jake took a leap ending up on the floor of the dingy- an ‘A’ for effort! We went up some small tributaries, dodging fallen trees and found some monkeys watching us! We found some weird looking fruit and stunning wild tropical flowers by the river’s edge. At the end of the river we reached a Giant dam, where the Gatun lake was blocked off for the last of the Gatun locks. We found it strange to see a group of houses or buildings at the base of this massive dam wall structure, but we couldn’t get close enough to see what they were. A Hugh ship was at the top of the dam, so strange to see a ship on top of the mountain (which is what it looked like). 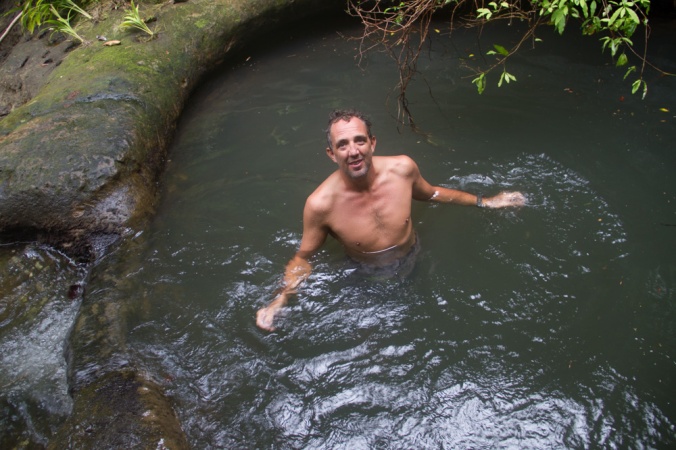 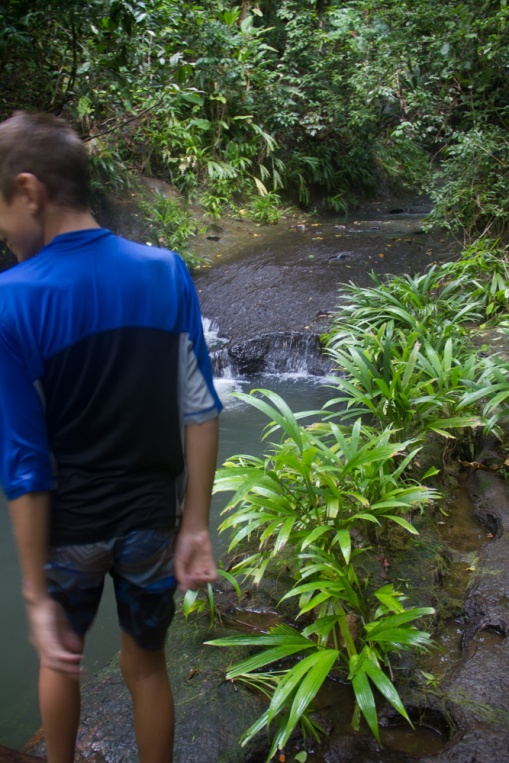 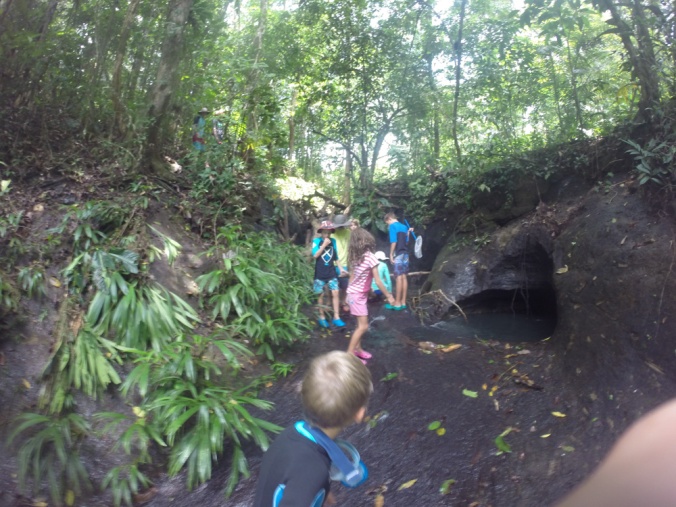 This was a slip and slide.

The next day Stu disappeared for a while and came back with a secret spot to explore. So we all went in convoy up the little water way, the river was narrow, overgrown with trees scraping up on us and after pushing through some overhanging branches a large spider was on Jakes neck!!!! We all saw it and the dingy erupted in an uproar of yelling and screaming, I managed to flick the spider off his back but it took a few goes of wild screams and afraid children, all the while I found this all very amusing and my laughter was mixed in amongst this mayhem!!!!!! We rounded the corner in the narrow water way carefully dodging fallen trees, rocks and vines with  sharp oysters attached under the water, to be greeted by a little water fall and a small rock pool. It was great fun, kids and adults bombied in the lovely cold waters, so refreshing to be cool again. We explored the river upstream and Jake and Henry (14 year old boy from Alkemi) convinced me to climb up a mini cliff over the stream on top of a fallen, wobbly, rotten log!!!! I easily could have aborted mission half way along as I was not enjoying the sway of the tree trunk, but was committed as going backwards was not an option……hmmm. With the help of nimble Henry I made it, with Stu in hot pursuit. Thunder was rumbling, so time to go. 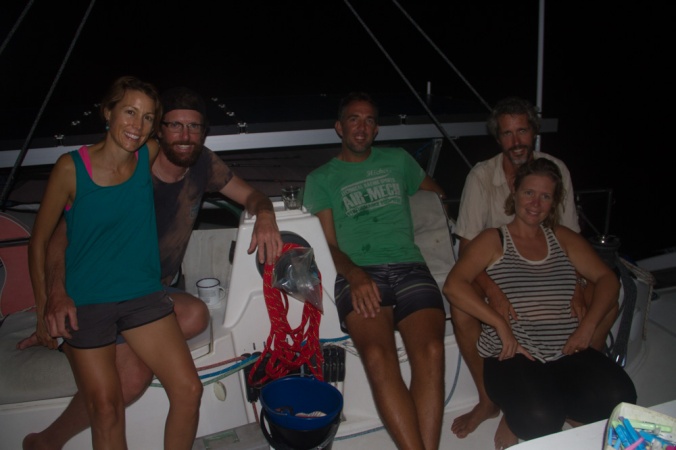 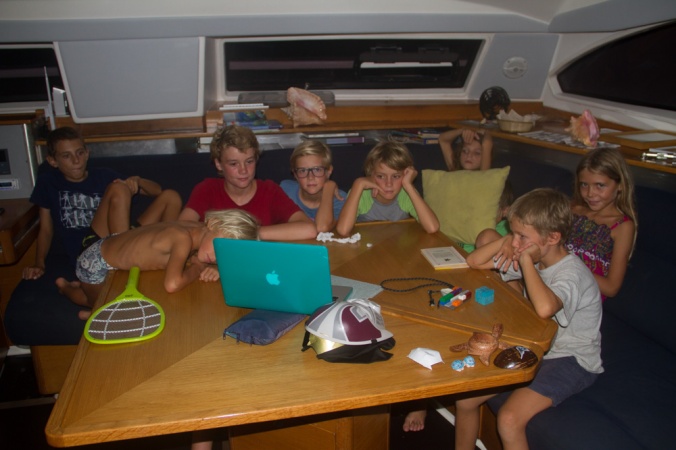 All the kids watching a movie.

Back on the boats we had a late lunch and back to kids playing. Our boys are going to miss the boys on Alkemi, they are a little older than our kids and a great influence on them. We will miss both boats, friends are made and go quickly when cruising and its unlikely we will see either of these two boats again. We tried hard to convince Alkemi to cross the Pacific with us, no luck. Unfortunately Zelma are selling up, they have 4 young kids and it’s not working according to them, plus she gets very sea sick, they had just finished a terrible passage from Cuba. Good on them for realizing this and making the decision, but it’s a pity partly because they were going to cross the Pacific with us and spend cyclone season in French Polynesia. We will miss them.

We were all so sad to be parting, the kids especially, they savoured friendships to the end with many a cross the lifeline handshakes, it was really cool and touching to see. 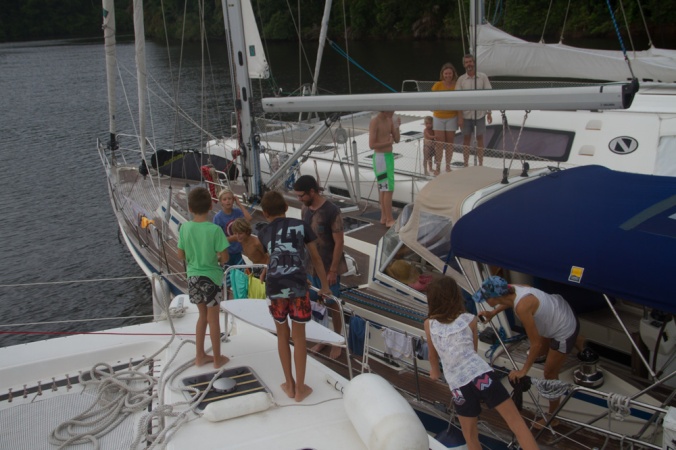 Once they disappeared around the corner and the conch shell blowing stopped, it was time to chat on the VHF till Alchemi were out of range.

After both boats left for San Blas together, we decided to head further down the river. We anchored at a spot that had toucans flying overhead. Yep, that’s right, toucans, how cool is that!!!! Thanks to my great camera I got some great pics, that’s thanks to Ange back home in Perth helping me to choose it, as well as teaching me how to edit on Lightroom.

Then there was one!

We were super excited to see these Toucans. 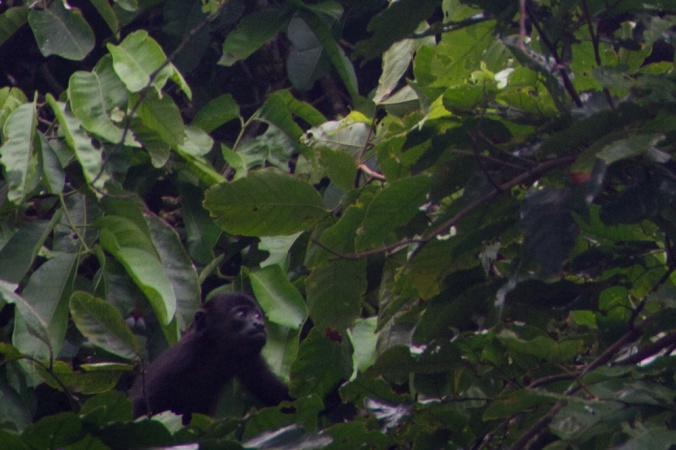 Inquisitive little fellas, looking down on us. 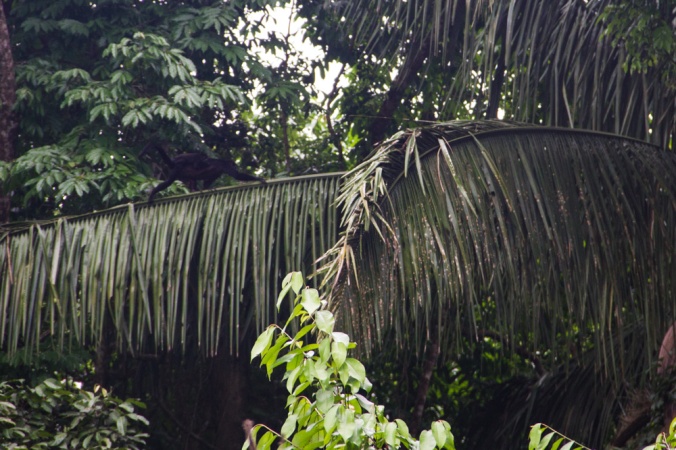 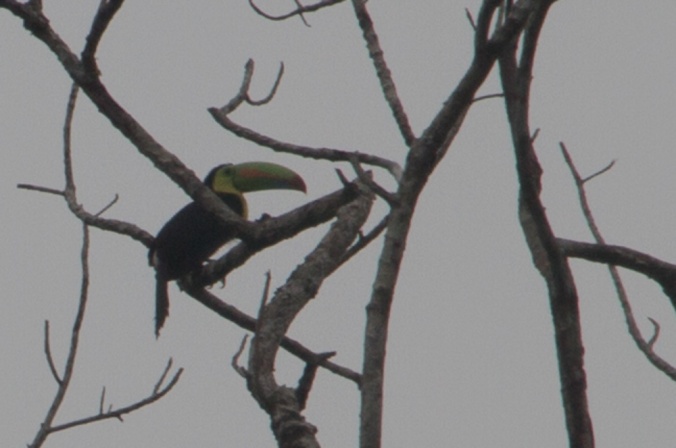 The following morning, we went for a dinghy exploration, unfortunately no crocs to be found, but we are sure we saw one from a distance. We caught large black butterflies from the back of the boat!! It was great fun, and we kept them for a little while. 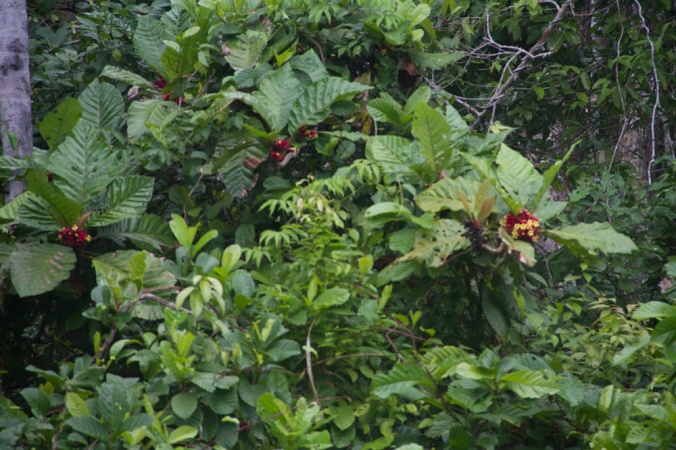 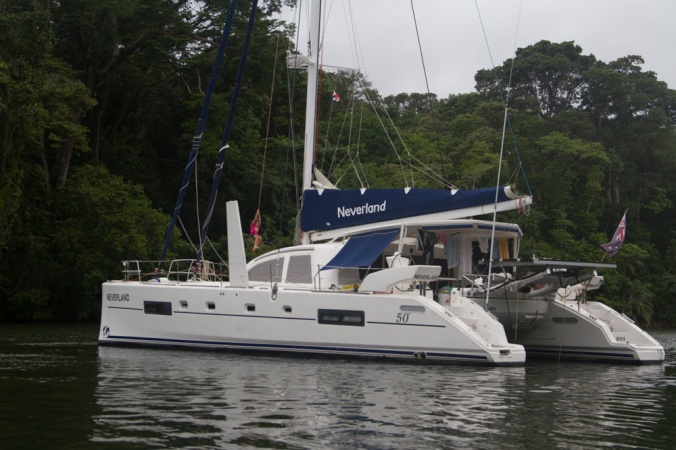 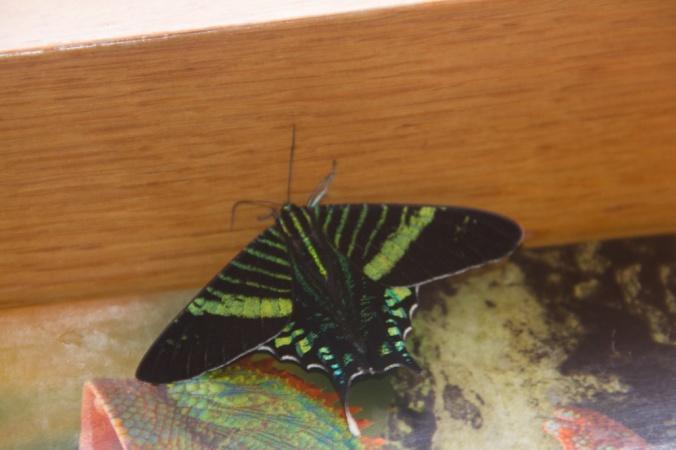 We caught about 5 of these stunning butterflies on Neverland, we kept them in the saloon for a while then let them go.

On the way back to Shelter Bay Yacht club we ran into a storm. Wind, rain and loads of lightning. As we rounded the breakwater entering the port, an intensely loud and close lightening clap made us all jump! I got the footage on my iPhone! Stu was at the helm which is out in the open, he jumped with a quick clamber under cover. We were glad when we were safely back in the marina.

Thank you again for reading, it feels funny to just always be writing about ourselves, but I guess I need to look on it as a diary of our trip. Thanks again friends and family.xxxxx