A work of art about our Neverland adventure brought by mum from the Bennetts, super special 🙂

We made sure we were safely in the atoll 4 days prior to mum arriving, just in case of bad weather stopping us getting in the pass.  The pass into the atoll went well, the wind has been light for a few days and the swell down, so was easy to enter it with little current.

Talk about absolutely stunning, we anchored all alone in 5 m waters that were shallow like this for a long way out, avoiding the coral bombies (phew), with pearly white sandy bottom. It’s a tropical paradise here, words can’t describe it. We snorkelled alot, kids windsurfed a few times, we did school every day, visited the nearby motus. One on deserted moto Sienna and I made lunch while Stu was coconut scouting wielding his machete. We drift dived the pass also, holding onto the dinghy.

Stu speared a coral trout which was a small in size. To avoid ciguatera we asked a local who said it is safe to eat if small, Stu tried a small piece the night prior and all good. So with some prompting from Stu I cooked it up. I was not particularly ecstatic cooking it up as I just had a feeling it may not be good, so I ended up only having a small piece as the little voice inside my head was saying it’s not worth it. Luckily Sienna fell asleep and had no dinner, Jake the OSH man told Alex not to have any more fish (just in case it had ciguatera), so Alex only had a small piece and Jake had none. Stu had everyones left overs and more.

Plenty of coconuts here to make their own Copra, which the kids did to add to muesli, yum thanks kids. 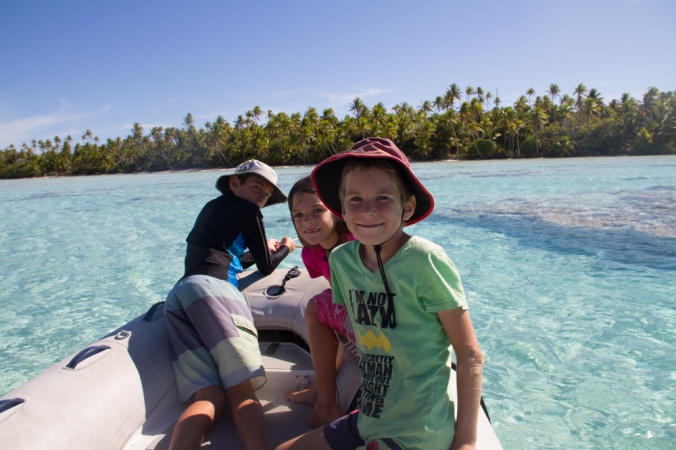 Hot bread, knife, cutting board, tuna, cheese tick, tick, tick – off to lunch on a motu!

Oh oh not  good as Stu was not in a good way. Stu was up most of the night as his his heart was beating fast he said, so he only got 2 hours sleep before the diarrhoea and nausea kicked in. Then we knew he had a case of ciguatera!!!! Oh man! We tried so hard not to get this, we hadn’t touched many a fish we caught in Makemo, just in case it had ciguatera. He didn’t vomit but had the runs big time for a few days. He was bed ridden and very uncomfortable.  Then the tingling, hot and cold reversal came in his extremities, where ice feels like burning fire and hot metal feels like ice, but mainly the cold feeling hot and very sensitive to temperature changes. He said when he went swimming it felt amazing, it was like swimming in champagne, or an all over body acupuncture session! This sensation lasted on and off for two weeks. The worst he said was the itches and exhaustion, which he still has on and off 2.5 weeks later. The itching got so bad he couldn’t sleep and he ripped the skin off his toes with irritation. His legs felt like lead even though he had done nothing, that is wearing off now thankfully but he tires super easy still. So so so thankful no one else got it. Especially since we had to sail up the long atoll to get mum 3 days after he got it. We will not touch any fish now, except tuna as it’s a pelagic fish. The fish with ciguatera get it from a certain type of algae found in coral reefs. We are so blessed not having this in WA. 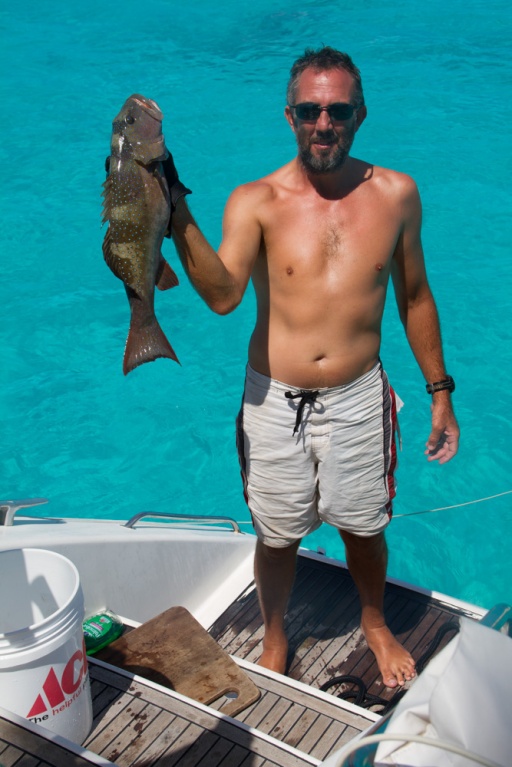 This is the culprit of weeks of agony for Stu – Ciguatera Poisioning.

Jake trying to spear one with his home made spear gun! No shark was hurt in the picture taking of this. 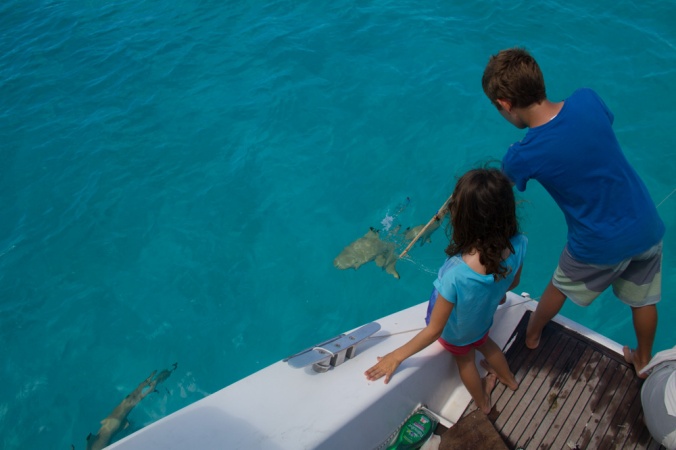 Black Tips a back of our boat after filleting a fish.

Nanny Bennet is Here!!!!!! It was with much anticipation and excitement we watched Nanny Bennett walk off the little plane at Fakarava airport. We sussed it out and ended up taking the only mooring ball right next to the airport, so Nanny saw Neverland whilst landing. It is so great having her with us again, loving it. Such a gutsy lady coming all this way by herself, three flights later. 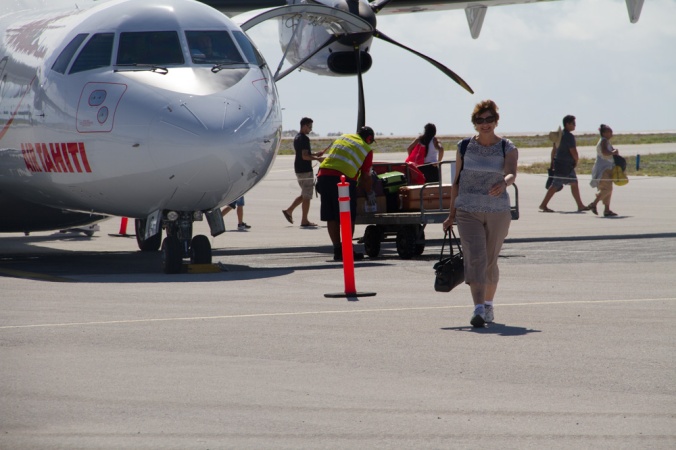 Its Christmas, I’m posing with my new crocs and bathers from the Colams.

When we arrived back at our anchorage with anchor down (around 20 minutes motoring away), the kids hijacked the Nanny and showed her the whole boat, complete with instructions on how to use the toilet (she was told three times, by each child!) and shown all our treasures like shells and things we have collected along the way.

Nanny unpacked her “boat stuff” bag in front of us. I don’t know how she fit any of her own things in after the amount of goodies she unpacked for us all!!!! A big thanks to Roy and Bev for collecting all those boat parts for us, we know there would have been many a hassle involved. We now have a main sail that does not squeak continually (sheeves replaced), and an engine battery that will not go flat now (very important) and a fully lit navigation control panel. There is many a job yet to do like rudder bearings which we will do when we haul, and the stern light which is a bigger job than thought, not just a globe replacement unfortunately. Boat jobs are a continual presence as stuff is always breaking.

So mum gave us presents from Bev and Roy – bathers, crocs for Stu and I and loads of stuff for the kids. Dave, Carlz, Bailey and Elarissa made a totally awesome adventures of Neverland painted poster banner, with exploding volcano, dinosaur, water and island scenes, it is so special! I was blown away by the work involved in it, it would have taken ages to complete with 2 little ones ‘helping’- so cool, thanks Bennett’s it will be treasured by us, its carefully packed away. The Bennett’s also sent Christmas presents, naughty Carleen, but thank you sista. Then of course the Nanny Bennett brought a heap of presents for us all. Yes, we got our much needed Vegemite too!!!! Alex the Vegemite kid is very happy. It felt like Christmas, I got my much wanted crocs and nickers (couldn’t find the particular ones I wanted anywhere)! We even stopped school for a few days.

The Bennetts sent this to us via mum, work of art!

We spent a few days in the main village of Rotoava, which was nice but not like the next places we went to. We provisioned making a few visits to get groceries as supplies improved after the supply ship arrived, plus it’s too much to carry in one go. Then we were off to a little anchorage we sussed out. We were alone, in a very pretty anchorage and loving it. School in the mornings then playing in the water in the arvos, mum SUPed to shore then snorkelled, not bad for a Nanny! Jake and I  SUPed around the corner and the bay was stunning, Stu was there and Nanny and the kids walked. Crystal clear, glassy waters. I saw a lump of coral with tonnes of Christmas tree worms (polycheate worms) and I actually saw a blue one!!!

Black tip reef sharks are common in the Tuamotos. 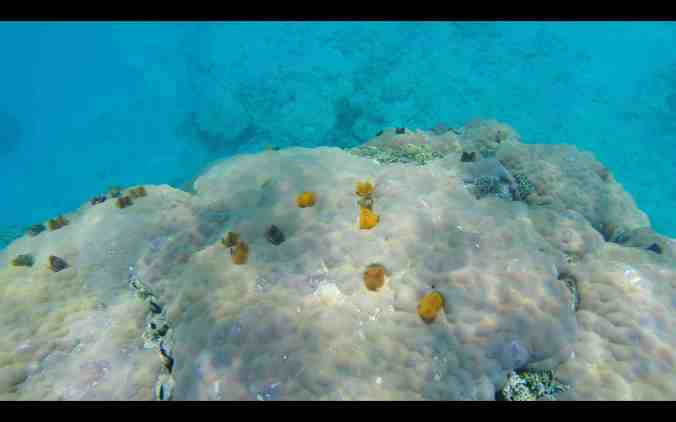 I love these christmas tree worms, especially the blue ones.

Alex gleefully running over his mother! 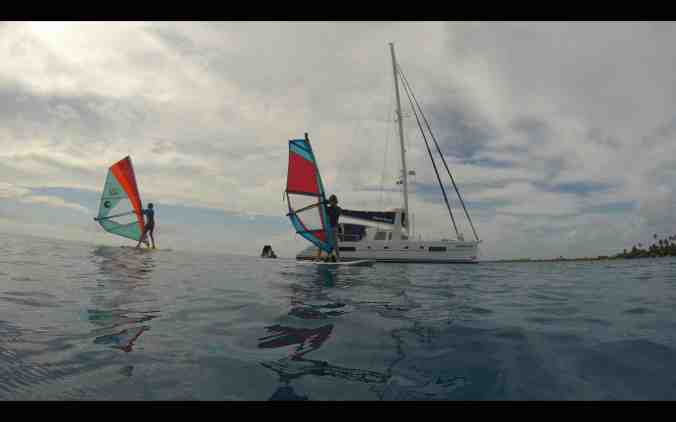 The next place was Pakota. This place was fun in that a kid boat arrived and we arranged a play in the water, our kids with windsurfers and their kids with an Oppy sailing dinghy. They couldn’t speak each others language but that didn’t stop the kids. Then we met ashore and the kids had a ball while we chatted to all the other cruisers in the anchorage. I met an interesting lady who scuba dives her way around the world, tagging sharks and doing research. We met Adrian who is a solo sailor and he kite surfed off his monohull in the middle of the Pacific crossing, to shower he drags himself behind his boat whilst sailing! 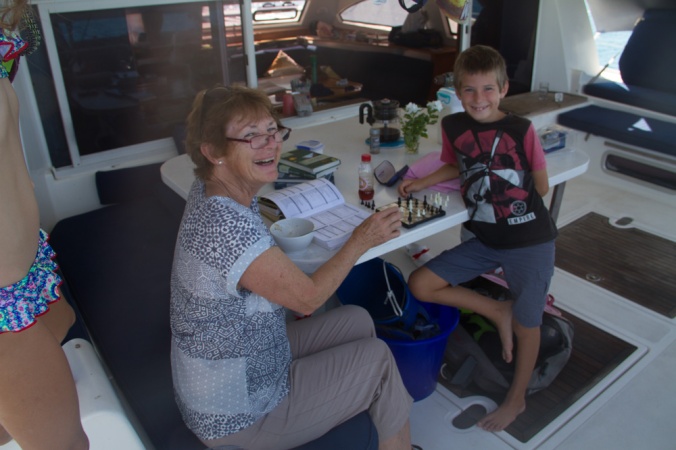 Chess loved by Alex, suffered in Nanny style by Mum!

Not bad for a Nanny!!! She SUPed all the way to shore. 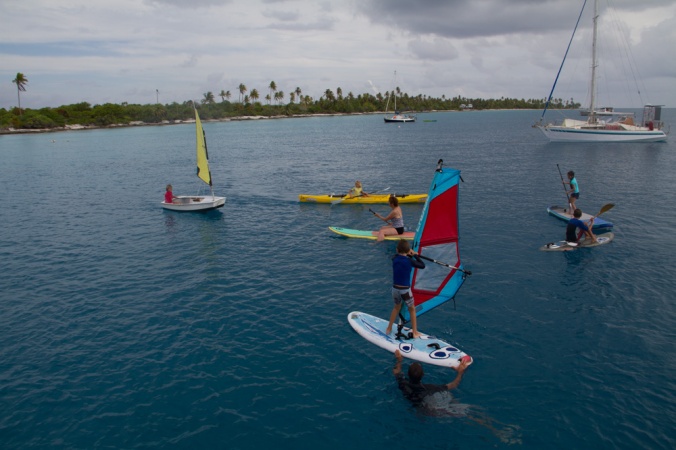 All the kids out playing.

Dinner at Pakota restaurant, they ate with us and it was super special. 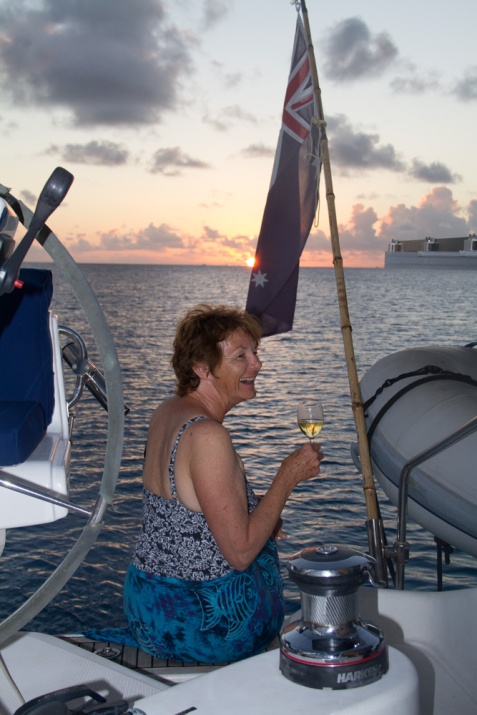 Ahhh this is the life!

We visited our first Pearl farm, very interesting. We were shown how the oyster is grafted and the mother of Pearl bead is carefully placed in the oyster, then they wait 18 months and gently prise the oyster open carefully removing the pearl, if it’s good the pearl is kept and another round mother of pearl bead the same size placed inside which the oyster. The oyster will lay pearl over this bead and this process is repeated 3 times. 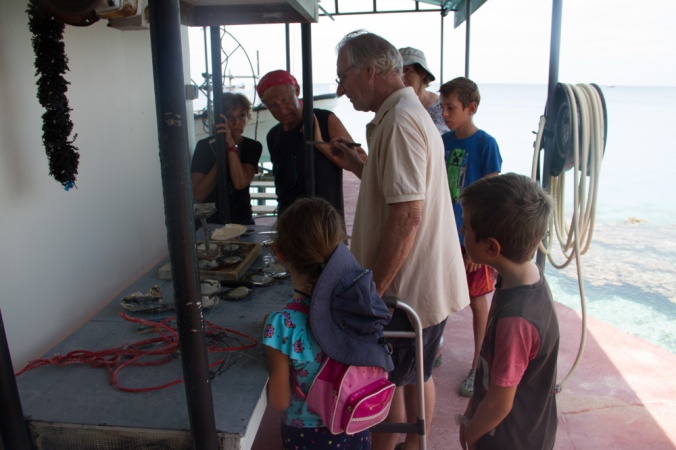 Our second time in Rotoava, SV Southern Comfort, Lauren and Rob invited us to see an iconic movie called Captain Ron. Mum and Lauren got on really well, as I knew they would. They were very gracious and had pop corn for us, it was a great movie with terrific company. 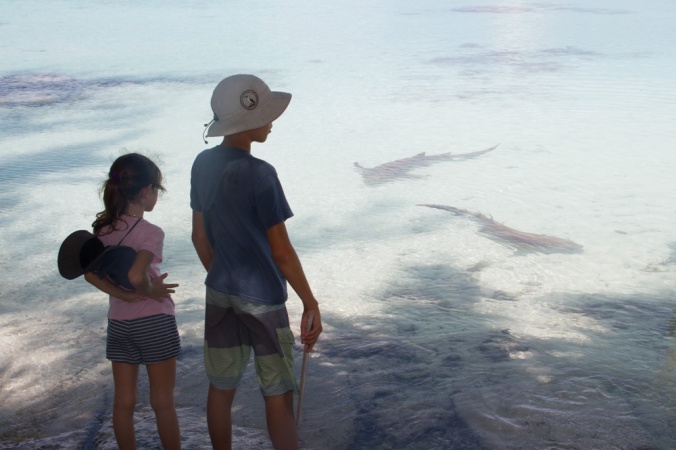 Large nurse sharks in close to shore, we SUPed over these guys which was a little daunting, though they are pretty harmless.

Thanks for reading family and Friends, from the crew of Neverland xxxxx