Mumma happily ecstatic to be here, as we were to have her with us.

Here we are in this absolutely stunning little anchorage that looks like a pass into the atoll but is not, as there is a shallow reef. Mums first real sail outside an atoll was nice and calm and pleasant, she was calm and enjoying the surroundings. We actually had a long chat by ourselves on the little seat at the front. It took around 7 hours of light winds, some motoring and some full main with gennaker sailing (we should have pulled out the spinnaker, but didn’t), swell was down and was pleasant. Mum had a sleep at one stage too, so did I.

We pulled into the anchorage to find it all to ourselves, except for the locals living in the huts ashore. We chose a mooring ball close to a lovely patch of reef, in we jumped to check the mooring was ok and Stu and I ended up staying in for hours. Alex, Sienna and mum swam off the back of the boat too, mums first snorkel off the back without the SUP board, she’s getting braver! The next day she did the same but hasn’t ventured far from the boat as worried about sharks. Little did she know the first day she did swim with a black tip shark a little way off from her, but didn’t know it!!!!! I didn’t tell her till the next day. The following day she was having a dip at the back of the boat alone when a shark swam by, she said she didn’t panic, it was just cruising by slowly but she did swim closer to the back of the boat – very brave of the mother dearest!

The shallow reef close to the boat is stunning, so full of fish and life. We are figuring out that at low tide and for a few hours after the low tide is crystal clear, as in all you want to do is peer into the aquarium like clear waters and swim. We have seen loads of giant green moray eels, the body the thickness of your leg. Sienna and I found two tiny little sea snake/sea horse totally camouflaged creatures, we later found out they are pipefish. Sienna did a little project on it with Jakes help on keynote. Tonnes of blue and green lipped clams, coral trout, schools of fish, bright yellow trumpet fish are my favourite, tiny little blue green fish, even saw 2 lion fish hiding under a ledge and loads of large cowrie shells. The water gets so clear that Jake and nanny were watching 3 octopus from the back step, moving and swimming on the sea floor! It’s like a wonderland under the ocean here!

Jake catching pet fish in a net, a big nose unicorn fish according to Jake. 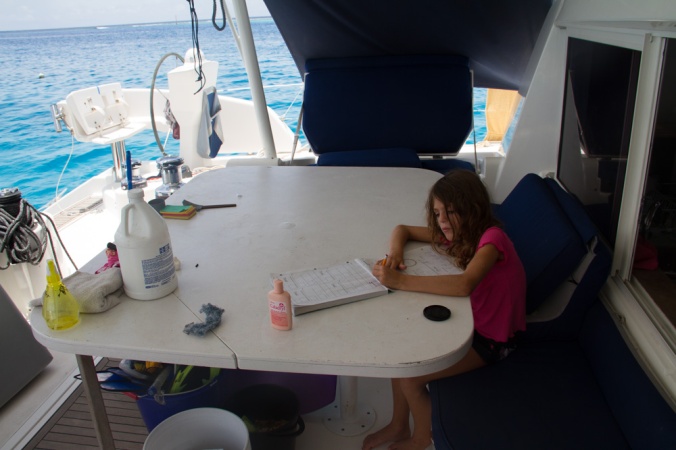 Stu and I went for a look at the pass. It was a coral shelf of around 12-18m that just dropped off to the deep. We saw tonnes of sharks, even baby ones all swimming around together. A massive school of large barracuda and a really large coral trout hunting with the big boys (sharks). Stu did a 25m dive, 2 minutes under water! Not even puffed when he got up, he’s a fish. I got to around 16m, deep enough to see a lot of sharks. The sharks are black and white tips, we are used to them by now, but still keep an eye on them.

It’s great having mum here. She is always appreciating the beauty of this place – the crystal clear waters, the fish under the boat (which by the way are cleaning our hull, it’s so good), the pink sunset, the stars etc. I am loving the school help and normal house help too. It’s so much easier with her here. The kids are loving having her here, she helps with their daily jobs that they are appreciative of. She does get rest time (sounds like we are working her like a horse!), and as she has been here almost 2 weeks now the kids are giving her a little more space. Jake had a sleep over in her cabin last night, very cute.

Poor Stu is still suffering the remnants of ciguatera. Feeling cold things as hot at times, intense tiredness and heavy heavy legs. Man I am so thankful the kids and I didn’t get it. He is coming good now, but it’s been 3 weeks.

We all went off in the dingy for swimming lessons today over a nice sandy shallow patch. Alex just loves being taught by Stu, and is hilarious. Stu taught him how to clear his sinuses pre diving, so there he is gargling sea water and spitting it out, and the rest that I won’t get into as it sounds a little gross. He was trying to equalize, with some success. Siennas freestyle is pretty good, Alex’s is too after a few sessions of instruction.

We dove the pass, lots of fish, Alex and Jake jumped in too. Jake dove down to around 5m, pretty good with hands free equalization! Just like his mum. He could go a lot deeper if he wanted. Mum was funny, I am sure she was on high shark alert watching out for us over the deeper water. She did really well, she got back into the dinghy by herself, not an easy thing to do. Argggggg, we’ll have her a jumping off the bow and swimming with sharks by the end of the trip, or she may have to walk the plank! 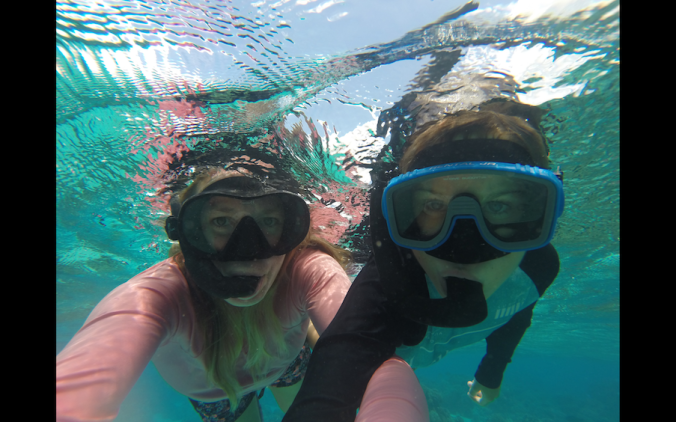 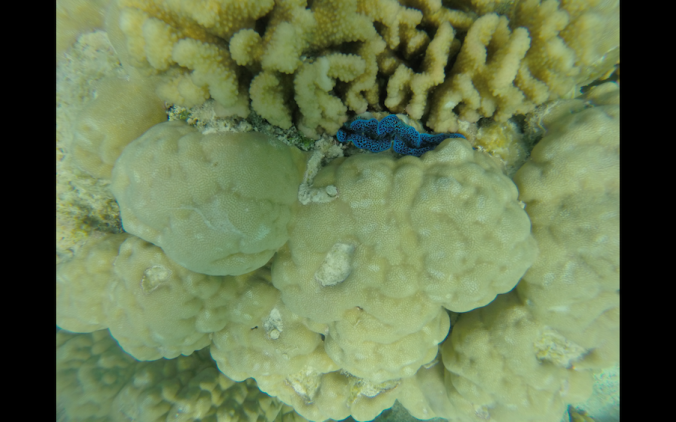 Alex and I went off the back of the boat for a snorkel to the nearby reef. He was so cute, he wanted to dive down, so he started his routine of gargling sea water, stretching his eustachian tubes and clearing his nostrils – just like Stu taught him. He got down to around 4 m and equalized, pretty good.

We saw some really cool fish, a bright yellow trumpet fish. On the way back, a squall hit and Stu and I jumped in to find Sienna’s bather top which blew in, it was great as I then watched two octopus under Neverland, changing colours whilst gliding over the reef and swimming. They are fascinating to watch as they slink along on their tentacles changing colour to white over the sand, and mottled browns over reef. There was a slightly smaller octopus holding the larger ones tentacle, oh how sweet.

I then watched an eel being cleaned by a small, very game fish. It swam in and out of its mouth and half way into its gill hole on its side and made the eel flinch every time. Then the eel swam out of his reef hiding hole into the open, very cool.

Today we did school as we usually do, then hit the pass with our snorkels. Mum stayed on the boat after some instruction on how this and that works in case of any problems (like mooring ball breaking and drifting into the reef, just little things like that, which is incredibly unlikely). We saw around 8 sharks, tuna and lots of fish. The kids really are used to the sharks now. 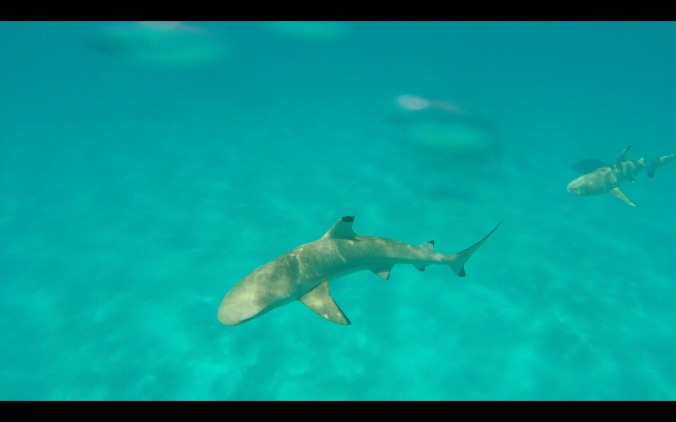 Stu and I decided to stay another 4-5 days here, mostly as we love it here and don’t want to leave the Tuamotos for Tahiti. The only thing is to have these extra few days we will have more swell (2.7m) if the forecast is correct, I sure hope our decision is worth it!

At night here it’s so nice going outside watching the stars and chatting with the mumma. The boat is surrounded by hundreds of fish at night, not sure what they are but there are hundreds of them on the surface. Jake is loving doing fish school, where he collects the pics we have taken whilst snorkelling and does a little write up on that particular sea creature on the keynote app on the laptop, using information from our books as internet is not an option. 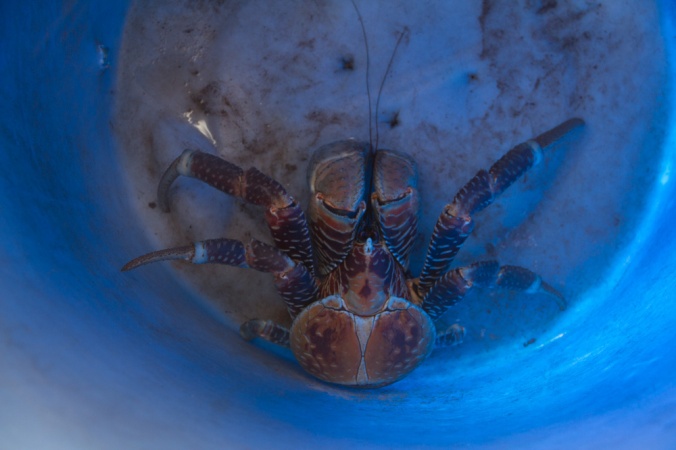 Mum, Jake, Sienna and I went ashore to try and organoze a dinner with the owner, she was unable to do this but it was interesting chatting with her, she was super friendly. When we returned Stu told me in crypic words what had happened whilst we were away. He was opening the through hull for the holding tank (toilet) and it just broke off in his hands, as this happened he was drenched in high pressure sea water funnelling in like a hose through the open hole in the hull!!!!! WHAT!!! This is a disaster.

Hole going through the hull is plugged by the wood.

He stopped the water pouring in like a high pressure hose with the palm of his hand and thank God Alex stayed back as Stu instructed him to find the through hole wooden plugs which were under the Navigation station seat and bring them to him. If Alex wasn’t there he probably would have had to wait until our return!!! They found the correct fit and hastily plugged the hole!!!! Far out, this is when I am thankful Stu is onto things and ready for any situation! We had nowhere to haul Neverland to fix this as we are in the middle of the Tuamoto islands! We were forced to sail with this plug in (which Stu reinforced from the outside too with another one), all the way to Tahiti, it was there for months!! Stu did put the old fitting back on but we were aware it was super thin copper thread holding it in place! It was a constant stress on our passages and checked regularly. Our bilge pump worked, but there was a problem with the one on our hull too, it ran constantly so the float switch had to be turned off meaning it would not automatically turn on of water went into the hull from the through hull breaking. We eventually fixed it in Raitea when we hauled which was a relief – yay. Good job Stu.