Jake helping to put up the spinnaker.

We left Tahiti with a sign of relief. We could have explored further along Tahiti Iti (the south part of the island) but ran out of time. We tried to leave the day prior, we ran around all am scrubbing decks, fresh food provisioning from the market and cleaning up Neverland. As we were to pull our lines off and all ready to go the port motor would not start, after a considerable time in the engine bay Stu discovered with the help of James and David, that the starter motor died and needed replacing. Luckily Stu sourced one the next day, installed it and off we went the following afternoon (amazing!) with S/V Sea Bean seeing us off, with plans to meet up again.

The sail was a long one, it seemed to take forever the following day, it took around 22hours by the time we moored up. We had a mixture of all wind conditions from 1-30 knots. We had the main up with the genoa, gennaker, spinnaker and motoring when there was no wind. We used the radar to dodge rain and lightning squalls, which were a little unnerving as one in particular got pretty close. One rain squall hit us with rough seas and 30 knots, upon which we pulled up sails just before it hit as we were motoring prior to that, we were propelled along nicely on 2nd reef (making the main and front sails smaller). Stu was out in the pelting rain, wet weather gear donned, hand steering through the squall.

Neverland on the trailer. 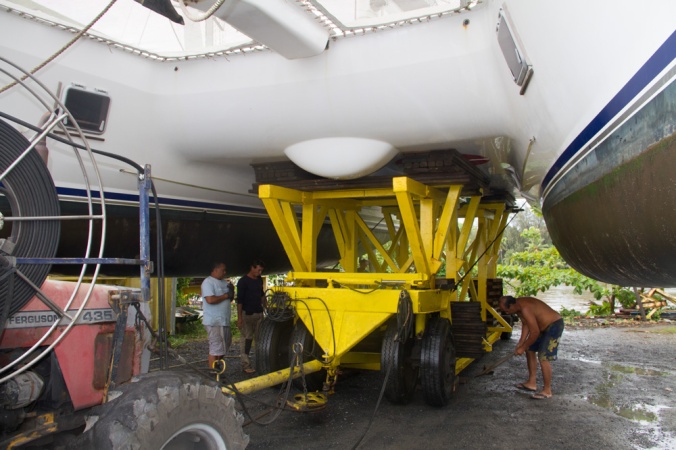 Notice the not so clean hulls.

Our long awaited haul date had finally arrived. We had visited and emailed all the boat yards in French Polynesia and finally found one well priced that can haul us, as some travel lifts and trailers can’t take our size. So this is what we have done on Neverland :

– Gooseneck: sail taken off mast to get to it, new bushings and washers applied.

– Sheave on top of the mast replaced.

– Propellers: removed and acid cleaned, primed and painted the same as the hulls, as described below.

– Sail drives:  oil replaced, replaced the bearing seals, removed stop cocks that were serviced and cleaned and put the new rubber boots on. A different aluminium compatible primer (Primercon) was painted on, then Trilux 33 antifoul paint was applied 4 times.

– Through hulls: removed 2 old through hulls and replaced with two new super strong ones including new valves and waste water piping. Hooray no more wooden plug to keep the seawater out!

– Minor fibreglass repairs on the hulls: Stu’s arms and neck creases are covered in red itchy blotches due to the powder and fibreglass getting into his skin, poor Super Stu, he is really hurting from this one and he is finding it hard to sleep from itchiness!

– Anodes: replaced with new zinc anodes on the sail drives and propellers.

– Hulls: the majority of the old antifoul was removed by electric sanding (this is the worst job in the yard) as the antifoul is a special type of paint that is thick and powdery with biocides in it that are toxic so as to repel sea life. The paint is designed to release a thin layer on the outside as water flows over it (ablative), removing any barnacles or weed that has adhered to this outside layer, hence it’s ‘self polishing’ but it only lasts around a year, we pushed ours to a year and a half. When this is sanded off, it turns into a dusty, toxic, chalky powder that you do not want to breathe in, this dust covered Stu from head to toe in black muck. He was wearing eye protection and a proper filtered mask.

The YUCK job of sanding the antifoul off the hull. 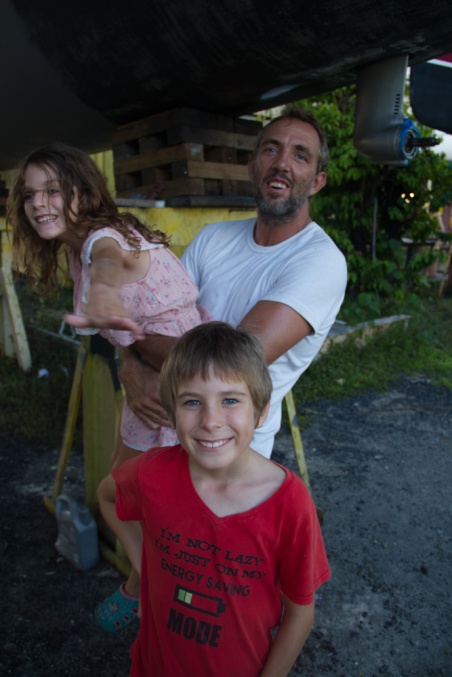 First coat of primer on.

Alex and Jake painting the anchor.

The hull was high pressure washed (by the yard), and we hand scrubbed some areas. Blue masking tape was applied to the upper edge of the hull water line, this job is time consuming as it needs to look straight. A high quality epoxy based primer was then painted on both hulls. Then 2 coats of antifoul applied with a 3rd coat around the water line, and 5 coats on the back transom. Phew that’s enough, this took around 10 days with the rain slowing down drying and painting – Great job Stu. 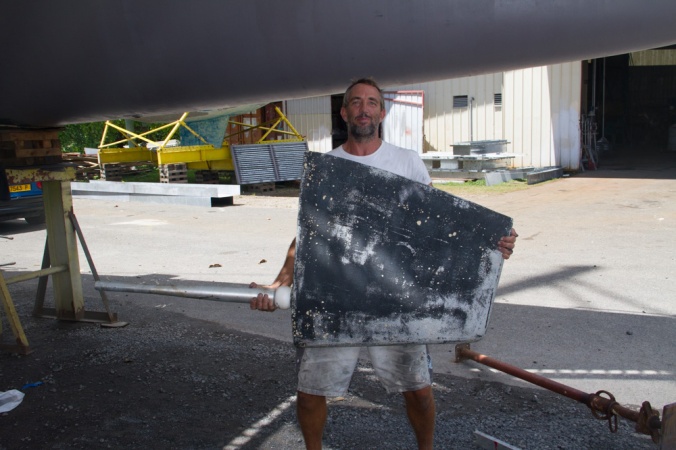 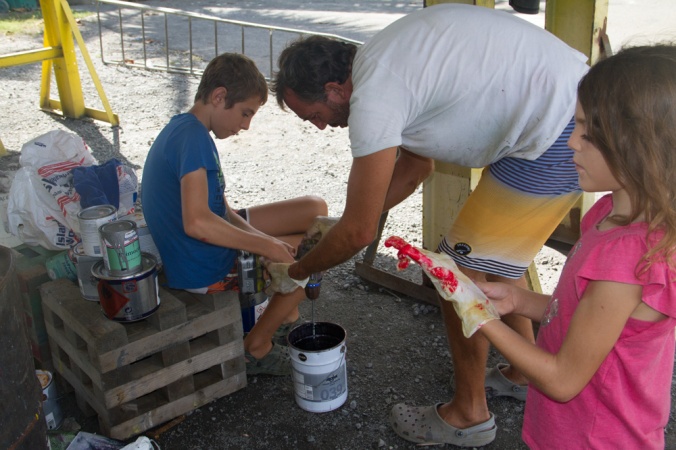 I was wanting to climb Mt Tapioi with the kids. So off we went to find the trail while Stu did boat work at the yard, which he was happy with as the kids can get a little narky and he can just get on with his work at full pace when he is alone. We walked for 2.5 hours, it rained for 90% of the time but I was very happy with that as it would have been stinking hot otherwise. We passed 2 small herds of cows and bulls on the drive up, on the walk up I was a little worried we would meet up with some more bulls, which we did but they were a little distance off. The path was a dirt road with thick dense rainforest on either side with no where to go, but was all good and totally worth the view. I was worried we wouldn’t make it as one child was usually giving up at any point in time, but another would step up (Jake usually) and help the one that was flagging – awesome. Sienna was super stoked and excited when we got to the top, the views were spectacular with Bora Bora in full view but unfortunately the rain blotted half of the view out. Alex made his mind up he was going to carry the heavy bag down the mountainside and he did, all the way, little champ.

Rain, but what a view!

I was researching future islands on noonsite, when I stumbled upon some shocking news. Some friends of ours were shipwrecked on Beveridge Reef at the beginning of the year. This reef is a submerged atoll, where you can enter via only one pass and anchor inside but there are no moto (islands) surrounding it, so it’s reported as being a unique experience as you feel like your anchored in the middle of the ocean. This poor family of 4 ended up on the reef in the middle of the night! How scary, they all survived with just minor scrapes. In the reports it is stated that he was totally unaware of the reef and it didn’t show up on his electronic charts. He had to zoom in to 12 nm (nautical miles) on the chart to see the island! That’s a long way to zoom in when on a long passage! Bobby is a really experienced sailor, he has crossed the Atlantic 20 times. Such a sad end to their journey, BUT they all lived to tell the exciting tale.

Kids creations (Marlin and Iguanas) drying while we did boat jobs.

We were delighted to splash (cruisers jargon for boat back in the water) again!!! We were watching Neverland as she was on the trailer being slowly pulled by a tractor which was slowly manoeuvring back and forth trying to get around the corner when they finally decided to move the 2 cars that were in the way!  As she wobbled and slightly rocked side to side, Stu and I exchanged apprehensive glances. Then the tractor had to line up Neverland on a narrow road down into the slip in the water, they did an incredible job driving the trailer. Then we were all ushered aboard, climbing up the high ladder to be way up in the sky on quite an angle as the slip was steep entering the water, it felt unnerving. We all carefully walked around the boat, Stu and I checking the 2 ropes attached to our winches holding us so Neverland didn’t slip off the trailer.

Neverland going back into the water on the slip, notice the precarious angle!

Jake was securing a rope (then I took over) which was attached to a floating jetty (more like a home made barge), just in case the wind blew us off our exit path as we had little room for error or we would be kissing another boat. The workers were under the boat in the water for a while also, removing and adjusting the wooden planks under the trailer, we couldn’t see what they were doing. Eventually we motored backwards, and Stu’s super powers avoided all the other boats, we pivoted and motored straight out, he made it look easy. 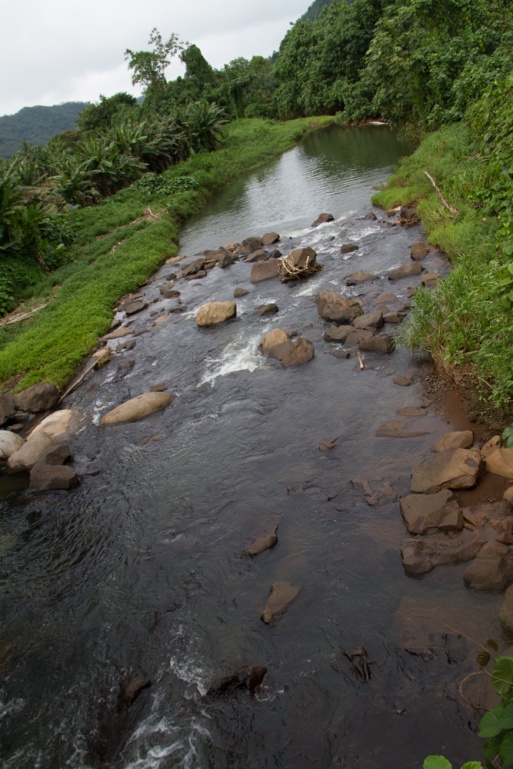 Now to find a mooring ball, all were taken, so we found the shallowest spot we could in 14m and down went our newly painted red anchor (thanks to Sienna and Alex’s painting skills). How happy were we to be out of the boat yard, there was a nice cooling breeze out on the water. We spent our last night in the house that night, Jake was very gutted to leave the house, he was loving the luxuries of a house as were we all – air conditioning (only in 2 rooms, but better than nothing), TV, dishwasher, endless running water, hot water showers (until it runs out anyway), endless electricity (until we had blackouts, which were almost a daily event as the town used to have 2 working generators until one a few years ago broke down, the current one is 30-40yrs old and overheats all the time so they have to turn off the generator to cool it down therefore power cuts are happening all the time), Geckos in the house were a constant source of fun, room to move and be alone and a car to easily obtain food and supplies. Oh and how could I forget the most important thing – INTERNET! We all loved skyping our family back home, we even got to see all the Colam clan together up in Leeman for Greg’s (Stu’s bro) birthday. 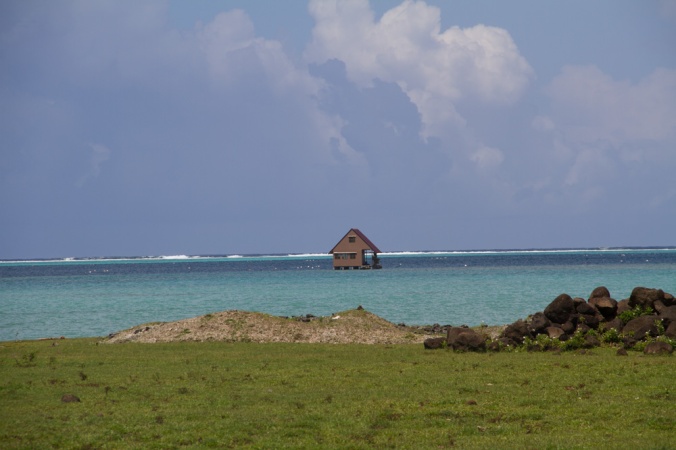 As we are nearing the end of our trip (well over half way), we allowed Jake to catch a Gecko to bring aboard as Jake has been dying to have a Gecko aboard Neverland. He was jumping out of his skin at the thought of this!! Many, many boats have Geckos aboard to catch the bugs. It’s been a few days now and we know of another Gecko stowaway that is aboard Neverland as he jumped off the dinghy into the water, so we have a rescue Gecko aboard also! Any way none of us have seen these little Geckos since. At the hire house the Geckos barked or squeeked, they aren’t barking Geckos though, we thought they were very cool.

Thank you for reading.